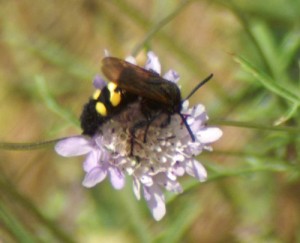 The aptly named Mammoth Wasp is an intimidating – looking insect, but despite its black and yellow ‘warning’ colours, it is not at all dangerous to people.

They are large impressive insects and females may grow to reach 4.5cm in length; the males are a little smaller and differ slightly in their appearance. 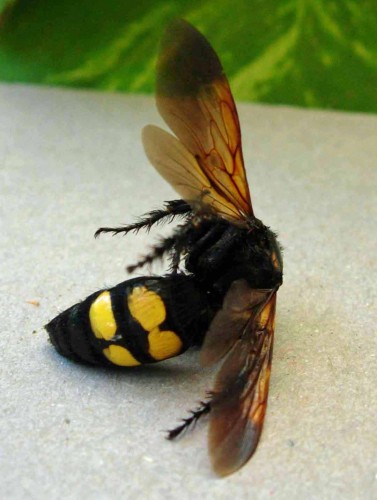 Sadly, I found this female dead in the garden

Females have a yellow face and short antennae, while the smaller males have a black face and longer antennae.Both are marked with yellow bands on their abdomens, which may be broken and show as four yellow spots.

The face of the female is yellow

The wasps are most likely to be noticed in the warmer weather of late May, June, July and August when they are found around flowers, seeking nectar.

Mammoth Wasps feed on the nectar of flowers 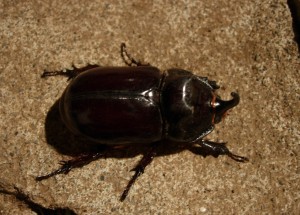 Mammoth Wasps are solitary and unlikely to be seen in any numbers. They are a parasitic species and females may be seen around decaying wood, tree stumps and the like, seeking the larvae of a specific beetle to parasitise.She will be searching for a large, plump larva of the Rhinosceros beetle (Oryctytes nasicornis); when she finds one, she will sting it to paralyse it, then lay an egg on its outer skin. Once the wasp larva hatches it will eat into its unfortunate and helpless host, thus killing it. The larva then builds itself a cocoon close to the host’s remains and remains there until the spring when the weather is warm enough for it to emerge as an adult.

There are several species of Mammoth Wasp in Iberia, another of which is Megascolia bidens.

The most marked difference from the species described above is in the antennae, which are always coloured, either yellow as the specimen in my photographs or sometimes a reddish-orange colour.

May – Feasting on the nectar of a Pink Cistus flower