There are several stretches of seashore accessible from various points within Sotogrande and all have a slightly different character. What they all have in common is the rather dirty-looking, coarse sand! They can all get very busy during the summer months, particularly July and August, and also on Sundays throughout the summer from about June to September. During the winter though they are very quiet and the only other people you see are fishermen; sometimes they are deserted and yours alone to enjoy.

Great for sunbathing, strolling along the sea edge, paddling, swimming or even surfing in the winter! Not the best beach for wildlife spotting, although a small lagoon, ‘Laguna de las Camellias‘ adjoins the back of the beach at the port end, which makes it a bit more interesting to birdwatchers. The lagoon itself is surrounded by reedbeds that shields it from the view of the beach, but it has a boardwalk around its perimeter, a bird hide that overlooks it and a rotunda at the end of the boardwalk from which you can sit and survey the beach.

View of the beach from Sotogrande port to Torreguadiaro and beyond

Large flocks of gulls gather here on the sand, which although composed mainly of Yellow-legged with fewer Black-headed Gulls, may occasionally be found to contain Audouin’s or Mediterranean Gulls. Cormorants speed past on their way to and from the estuary, sometimes landing to fish from the rocks at the far end of the beach and can be seen returning singly and in small flocks in the evenings. There are never high numbers of waders here, maybe a few Kentish and Little-ringed Plovers, very occasional Sandpipers and Redshanks during the winter. Terns may be spotted passing by as they patrol the shoreline, most likely to be Sandwich Terns. Offshore you may pick up Gannets, Razorbills, Red-breasted Mergansers, Black Scoters and Black and Great Crested Grebe.

Some of the local Monk Parakeets frequent the eucalyptus trees located at the far end of the beach and also pass by on their way to roost in the evenings. The bank of the lagoon at its Torreguadiaro end is the location of a large Egret roost that accommodates up to 300 of the birds which fly in from all directions each evening. The Egrets are joined at roost by Jackdaws which settle amongst the mass of white feathers like black punctuation marks.

A short stretch of beach that fronts the lagoon and reed beds of the natural park, continuing up to the edge of the estuary. There used to be a boardwalk here that ended in a rotunda at the estuary end, but it was seriously damaged by winter storms a few years ago and although it was repaired the same thing happened over the following winters.Attempts to repair it were finally abandoned and its sorry remains were finally dismantled this year, although the rotunda remains intact. 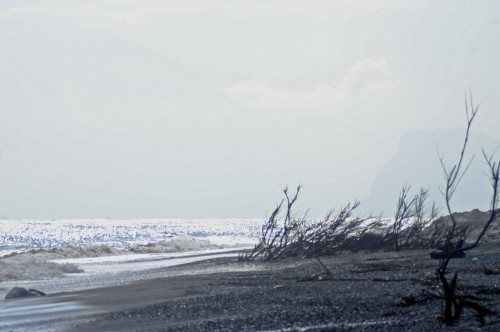 Perhaps the most interesting and productive beach in terms of wildlife, particularly birds, it is also very accessible to people who want to exercise their dogs without too much effort – a bit of a sore point with me. People and dogs drive to the entrance of the reserve, park their car and then make the short walk to the beach: during the summer this path often becomes so soiled that it smells very unpleasant, a real ‘dog-pooh alley’. Dogs are free to roam close to the edge of the lagoon as the fence that used to give it some protection is also gone, replaced by small signs requesting that people do not pass them. I don’t blame the dogs, they can’t read, nor do they realise that collections of birds are not there for them to chase. When we have much longer beaches, not attached to a wildlife reserve, I do not understand why this one can’t be left alone. (ps – I love dogs and have a tiny one myself, but when I rarely bring him here he is always on a lead)

Now that is off my chest, I will say that the best time to visit this beach is during the months of winter and early spring. Then you can have the place to yourself for hours sometimes and see birds, not in huge numbers, but often Sanderlings, Ringed and Grey Plovers (one or two of the latter), Cormorants, Turnstones and large numbers of gulls, Yellow-legged of course, but some Black-headed, Lesser Black-backed the occasional Great Black-backed  and if you get really lucky, maybe a few Audouin’s Gulls.

I’ve covered the birds of the reserve more thoroughly on the page describing the reserve & estuary.

Beach from the Beach Club/Waterworks to Alcaidesa

This is a very long, unbroken length of beach, with excellent views of Gibraltar on a clear day, that offers a lot of potential for a good long walk, discovering some of the wildflowers that favour a beach or dune habitat, and for spotting birds if you feel so inclined. For the most part the sand is soft and deep and can be uncomfortable to walk on for any length of time, but the ground at the back of the beach that is bounded by a barbed wire fence is firmer, and this is where you will find the flora and fauna anyway. Behind the wire fence is a large expanse of privately owned land that is unfortunately off-limits. That is where the birds like to be of course, so binoculars are very handy. Historically marshy, the area still floods quite extensively during a rainy winter and a few pools of rush-fringed water remain most of the year round, one of which you pass by when walking this way; Little Grebe breed here and can be seen throughout most of the year and Fan-tailed Warblers seem to like the rushes.   In the autumn and winter this is one of the places that Cattle Egrets gather together before taking off to roost around the nearby Laguna de las Camellias,  Stonechats frequently use the wire and the posts of the boundary fence for perching to watch for insects on both sides of it. Crested Larks are common on the gradually-vegetating dunes at the back of the beach and this is the place you may also see Kentish Plovers .

The land immediately behind the water-works is an unlikely but often productive spot for birds and I have seen Cirl Bunting and Northern Wheatear there. Greenfinch and Goldfinch are fairly frequent sights. White Wagtails gather all around here in the evenings too, before settling to roost and can be seen running around on the beach, the lawn of the beach club and the roof of the buildings. Linnets may be also be seen, sometimes in a small flock pecking around on the ground a bit further in to the scrubby private land, but also flying around in ones and twos. Kestrel hunt here, sometimes Buzzard and occasionally Marsh Harrier too.

Close to the sea and offering the cover of vegetation sightings of passage migrants are always a possibility; I’ve already mentioned Northern Wheatear, but there may also be Hoopoe and smaller birds such as Yellow Wagtails stopping over briefly. As with the rest of this coast, you never know what you may chance to see.