SPRING IN THE ALCORNOCALES NATURAL PARK

This is generally a well-attended outing as the area covers a range of interests, is easy walking and, importantly, has an excellent venta – Venta La Jarandilla – to visit for lunch at the end of it. This is where we come to look for the first orchids of the season and anticipate our first close sightings of the charismatic flock of Bee-eaters that return here to breed each year. The mix of trees and shrubbery and the nearby river attract a good range of woodland birds and it is a pretty reliable place to see Griffon Vultures and other large raptors such as Booted Eagles and Short-toed Eagles that regularly over-fly the area.

Bird sightings began on my journey there; the resident White Storks were in place on their nests atop the pylons alongside the railway line that runs parallel to the San Roque – Jimena road (A-405) and we encountered a group of five Griffon Vultures that were flying very low to the ground at the side of the road, maybe checking out some carrion.

The morning was bright and sunny with clear blue skies and a hint of a north to north-easterly wind, a perfect spring day for spending outdoors. Much to our surprise and delight, sightings of returning migrant raptors began almost as soon as we got out of our vehicles and continued in a steady stream all morning, all travelling from the direction of Tarifa rather than Gibraltar. None seemed to be in any particular hurry, some actually circled around over us a few times, and we guessed they were taking it easy waiting for the air to warm up and seeking thermals to lift them up and speed them on their way.

The smallest of the eagles, about the size of a Buzzard that occurs in both a pale and a dark form. Dark form may be confused with a Black Kite, or possibly a sub-ad. Bonelli’s Eagle. When soaring, wings are held pressed slightly forward, while hand tends backwards.

There was a predominance of Booted Eagles, mostly Light-Phase individuals but with some Dark Phase ones too. There were large numbers of Griffon Vultures, Black Kites, a few Short-toed Eagles, and several Sparrowhawks that were flying higher up, perhaps avoiding the larger birds while keeping them in sight. Several flocks of joyfully noisy Bee-eaters also travelled across in groups of varying sizes, we counted 27 birds in one group, 17 in another and so forth.

Higher above us there were Swifts that our bird expert companions, here for a stint of ringing in Gibraltar, informed us were most likely to be non-breeding Pallid Swifts as their return is generally earlier than that of the breeding adults and the Common Swifts. We also spotted Barn Swallows, a single Red-rumped Swallow and House Martins. All those birds in a mesmerising hour or so, and we’d only walked a couple of hundred metres along our route. Bringing our focus back to ground level, we began to pay attention to the flora; several shrubs are in flower now including golden-yellow Acacia, frothy white Hawthorn and the red flowered Mastic Tree.

A very widespread and common plant of garigue, maquis and dry rocky slopes, the Lentisc or Mastic Tree is a small, tough evergreen tree or shrub growing to 6-8m or so high, usually less. It has dark green leathery leaves that give off a resinous smell when crushed. The flowers are held in dense panicles or spikes, with male and female flowers borne on separate plants. The fruits are small and spherical, red turning to dark brown/black. A member of the Cashew family, the plant has a number of diverse, traditional uses. Resin, or mastic, is obtained from the sap of the tree and can be used to make a varnish, a liqueur known as mastiche and a sweetmeat known as masticha. The mastic is also used as a chewing gum and the fruits produce an oil that can be used for lighting.

Whilst some of us had lagged behind to gaze skywards, others had continued ahead of us and reported they had seen 2 Crested Tits and a Jay. We missed them, but ticked Robin, Blue Tits, Great Tits, Greenfinches, Chaffinches, Goldfinches, Blackcaps and a Wren.

We also had some excellent sightings of a Short-toed Treecreeper, which we were very pleased with, as our visitors hadn’t seen them before.

A Speckled Wood butterfly appeared, characteristically patrolling the edge of the vegetation before settling to bask on a fallen branch in a sunny spot. The butterfly caused some interest to our birding visitors who hadn’t seen this form of the species before. The markings are similar in both forms of the insect, but in the individuals we see here orange spots replace the cream of those seen in Britain.

The behaviour of the Bee-eaters was quite different this year; previously we have watched them very actively flying about between various perches within the field,  grouping together on perches, then taking off and re-forming while others swooped around alone, always putting on a colourful, noisy and entertaining show. Today there were a few birds doing that, while others were perched much higher up, on dead branches near the top of a eucalyptus tree from where they were swooping down and around, before returning to perch again. Other birds were a distance away on the banks of a grassy hillock, too far away to make out what they may have been doing. It is possible that the birds were very recently returned and still establishing the hierarchy of the colony, whose nest was whose etc. (Last year we were here in mid-April.) Also, judging by the size of the flooded areas there is the added possibility that some of the nest tunnels may have been damaged or destroyed by water. As ever though, watching these delightful birds was an uplifting highlight of the outing, let’s hope they enjoy a successful breeding season and are there to see again next year.

The field often yields a good array of other species of birds as well as Bee-eaters. Today there were no less than three Woodchat Shrikes perched on top of shrubs, Goldfinches, Greenfinches and a flock of Spotless Starlings pecking around on the ground. There are often Stonechats to be seen here, but not today, and we have seen a Raven pair too.

This is one of my favourite woodland views ; I particularly love this cork oak tree with a garden of fern growing amongst its branches. It must be quite old as it is huge and has had bark removed from the branches as well as the trunk.

We usually make this a bit of a circular route by walking part of the way back along the side of the main road, although it does put you in the path of oncoming cars, which don’t tend to slow down much for ambling pedestrians. It does present a variation of habitat though, as now you have a more open view of the ‘back’ of the mixed vegetation that you have just left on one side and an expanse of cork oak woodland on the other side. Birds cross back and forth over the road, but some species, such as Nuthatch, do seem to favour the cork oaks although again we didn’t see any today, but we did see a Chiffchaff and a lovely pair of Blackcaps in the same little tree. We also heard a Willow Warbler and spent quite a while fruitlessly searching through foliage (with binoculars) for Firecrests which we could hear calling to one another as they moved around, but could not locate. 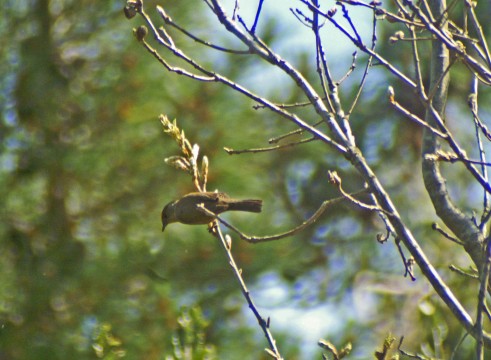 For our safety, and another chance to search for orchids that may have appeared since we passed by the first time, we cut back onto our original path before reaching a particular sharp bend in the road. Now we had seen the majority of our target birds we could concentrate on the flowers, although we were distracted by a little Serin singing his heart out from a branch overhanging the path and I stopped to follow after a beautiful pristine Spanish Festoon butterfly.

Another butterfly caught my eye, this time a female Moroccan (Southern) Orange Tip butterfly that was taking nectar from a Bermuda Buttercup flower. I was pleased as this is the first female of the species I’ve been able to get close to.

Moroccan (Southern) Orange Tip - Anthocharis euphenoides - this is a female, much less brightly coloured than the male

Then finally, almost back at the point we had started from, we found some orchids! A beautiful Sawfly Orchid was the best specimen we discovered, but there was also a Bumblebee Orchid and one rather small Woodcock Orchid.

The appearance of orchids is unpredictable as their growth may be affected by rainfall levels and other factors such as successful germination, and this is still quite early in the season, so there may well be more to come later on. Bee Orchids, Woodcock Orchids, Large and Small Tongue Orchids (Serapias) all occur here and in previous years we have found them all.

Sawfly Orchids are amongst the first of the Ophrys orchids to flower. The flowers are variable in colour, frequently in shades of pink, but a pure white version also occurs. Bumblebee Orchids are less commonly found and less showy, so are easily overlooked.