Benalup-Casas Viejas is a town with 6.347 inhabitants, who are known as Benalupenses. It is located in the middle of southern Cadíz, in the comarca (region) of La Janda. It is built on a hill called Loma de las Grullas (Crane Hill), perhaps because of its nearness to the Laguna de la Janda where there were huge numbers of the birds before the lake was drained.

The history of the town dates back to prehistoric times when a settlement was established that left behind it one of the most important historic legacies in Spain, La  Cueva del Tajo de las Figuras that is located nearby. The cave belongs to the group of paleolithic and neolithic sites in southern Spain that house examples of rock art that the Spanish call “art-sureño” (southern art). In 1913, Juan Cabré and Eduardo Hernández-Pacheco began the first systematic studies of “art sureño” at this cave. The paintings are mostly representations of birds and odd four-footed man-like figures dating from neolithic times. 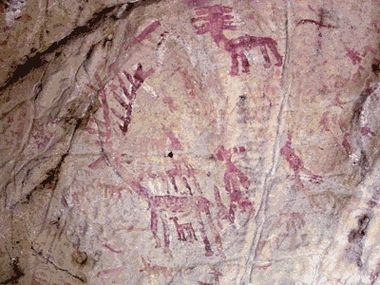 The original settlement developed around La Janda Lagoon, where the ecosystem provided all the necessary resources for a comfortable existence. There was a great abundance of game to hunt, Deer, Wild Boar, Partridge, Rabbit, all kinds of birds, etc). Water was here in abundance, and the rocky terrain provided innumerable natural shelters which were used for defence and housing.The location was  also highly prized for its strategic position, placed between the countryside and the mountains and very near the sea and coastal villages visited by Phoenician traders.

The Christian conquest was carried out during XIII century, first under the charge of Fernando III el Santo, followed by his son Alfonso X el Sabio who consolidated it. For two centuries this area was a dangerous and uncontrollable frontier zone, one of the reasons  for the formation of large states which was an important factor in the establishment of the village, its later development and its historic future. The first official record of  the settlement of  present-day Benalup-Casas Viejas appears in the XVI century, although there are earlier references to a population here in the XIX century.

The most profound and tragic events in Benalup’s civil history occurred  in 1933. The hopes of the local people had been placed on a Republican victory, but when this did not happen, disillusioned anarchists decided to mount their own revolution and introduced a communist regime into the town.The Guardia Civil stormed the house where the rebels were based and set fire to it. Nor did the repression end there;  on numerous occasions, people suspected in being involved in the anarchists’ initiative faced the firing squad.

Following that the village suffered a decline until at the end of the 1940s and the beginning of the 1950s, it began to show signs of recovery.This was again halted in the sixties when there was a great demographic crisis brought about by the emigration of many of the younger people of the town seeking work elsewhere, an event that was replicated in many other places and which devastated much of rural Spain in that decade. The village underwent great changes. The crisis affecting the traditional agriculture laid the foundations for a village with very different economic, social, cultural and town-planning characteristics. These agricultural transformations changed the direction of the big farms that surrounded the village and increased intensive farming created plentiful labour.

The last thirty years have seen Benalup grow rapidly, and it now has a predominance of immigrant and young inhabitants. Another reason for its rapid growth follows the segregation of the town from Medina Sidonia in 1991. Benalup’s indepence generated investment in the town, and the improved infrastructures and construction of important public buildings have encouraged immigration, regenerating the area.

The ecological disaster at La Janda

Near the Cueva del Tajo de las Figuras was the ancient Laguna de la Janda, a haven where millions of birds, both resident and migratory species, found a suitable habitat for feeding and reproduction. Unfortunately, during the middle part of the twentieth century, this important ecological niche was destroyed. To support local rice-growing, water from the lagoon and its associated fresh-water wetlands was diverted, and the area dried up almost completely. In the process, the last reproductive Spanish population of the Common Crane (Grus grus) was lost as well. 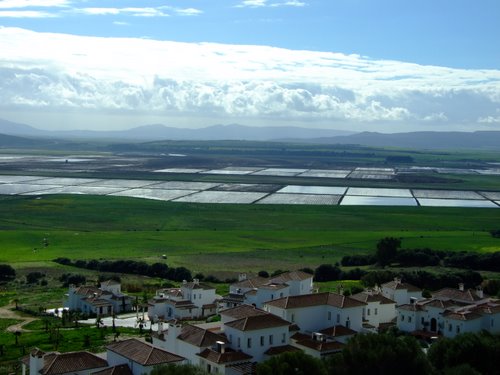 Benalupe and flooded rice fields beyond from the tower

– The Morita or Benalup Tower. Marvellous views over La Janda can be enjoyed from the top of the tower.
– The Church of Nuestra Señora del Socorro .
– El Cuervo Monastery. Also known as the Las Carmelitas (the Carmelites). 18 th Century.

El Tajo de las Figuras Cave Paintings, The Bronze Age. In 1924 the Cueva del Tajo de las Figuras was declared an Artistic Architectonic Monument by the Spanish state, then instated as a national monument in 1932. It has been called the “Altamira” of  schematic painting. For several decades, in order that visitors might better able to discern the paintings on the wall, tour guides have repeatedly sprayed water on them. This practice has resulted in the deposition of layers of lime on the paintings. Beginning in 2005, an effort to restore them was undertaken.