The Guadarranque reservoir (embalse) was constructed in 1966 and belongs to the Cuenca Mediterránea Andaluza. This body of water was formed by the construction of an Embankment Dam designed to contain water from the River Guadarranque. Its basin covers an area of 143 km2 and receives an average annual rainfall of 1.100 mm. The reservoir has the capacity to hold a volume of 87 hm3 of water, has a surface area of 435 hectares and a river length of 11 km.

Located within the municipalities of Los Barrios, San Roque and Castellar, about 19 km from Algeciras Bay, the water from the Reservoir is then supplied to the people who populate the Campo de Gibraltar, to the industries established around Algeciras Bay and for irrigation purposes  (1.000 hectares approx. in the areas of Guadarranque, Palmones and Hozgarganta).

There are superb views of the reservoir from the narrow winding road that leads up to the old town of Castellar, but if you are driving there are very few, if any, safe places to stop to admire it- especially at the weekends. It is better to drive right on up to the town and view it at leisure from the safety of the old castle walls. 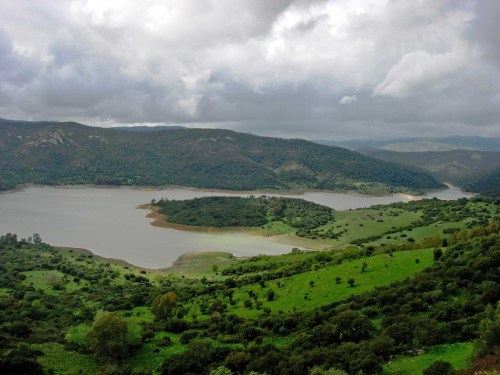 8/5/06-View of the reservoir and Guadarranque river valley from Castellar; water level low

The water levels of the reservoir are of course a reflection of the amount of rainfall received over the traditionally rainy months. Rainfall during the winters of 2005/6 and 2006/7 were low, consequently so was the depth and breadth of the reservoir. 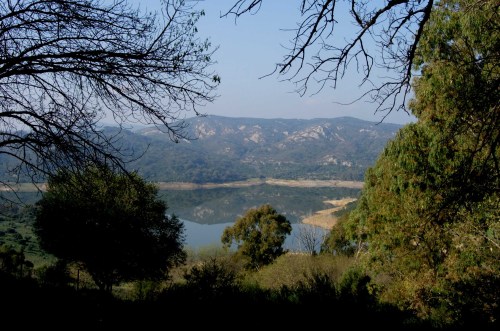 17/1/07-CASTELLAR-Low rainfall so far this winter, reservoir water levels remain low. View from the cobbled pathway to the old well

In contrast, the winters of 2009/10 and 2010/11 saw record levels of rainfall across the whole region and all of the reservoirs full to capacity and even flooded.

7/2/11-Very high rainfall this winter has resulted in exceptionally high levels of water in the reservoir. With a background of rocky hills the scene is beautiful

It is possible to walk or drive closer to the reservoir along part of what is the far shore in the photographs. The roadway is accessed from the bottom of the hill that leads up to the Castle: if walking, park in the area in front of the Venta de Jarandilla. Walking or driving, follow the road to the left, crossing the small bridge over the Río Gadarranque. Continue on for about 250m, then take the right hand fork where the road divides; there is a no-entry sign here, but you can disregard it as part of the road is public and the sign refers to an area close to the dam about 2kms further on. Continue on the road for around 1.5kms and you will reach a parking area on the right;  there is a stone outcrop here with stone steps that lead up to an observation platform overlooking the reservoir and across to the castle.