I have always been fascinated by these highly mobile and colourful insects, but it is only in recent years that I have become aware of just how many different species there are. In South Wales their numbers seemed to peak in August and I began to photograph and attempt to identify them as they hovered and darted around the golden flowers of Hypericum and danced around the flowerheads of my fennel plants.

I hadn’t been as aware of hoverflies here in Spain until this May (2011), when the flowers of my privet attracted dozens of larger ones. To identify them I have consulted various guide books from my collection, finding the ‘Field guide to insects of Britain & Northern Europe’, author Bob Gibbons, particularly handy. Although I am looking for insects in Southern Europe, there do seem to be a lot that occur in both the north and south. As I am building up this guide as much for myself, I am only including species I have seen and recorded to date and as always all photographs are my own.  __________________________________________________

There are several hundred species in this important group of insects, but many are identifiable from a superficial examination, thanks to their bright colours in reasonably stable patterns. They are attractive, harmless insects that share the habits of hovering readily, then darting.

All feed at flowers on nectar or pollen, particularly favouring the flat, open flowerheads of the Umbilliferae. Large, glossy leaves present ideal basking and perching sites, and hoverflies can be seen running around leaves sucking up any spilled pollen they come across with their broad, flat mouthparts.

Some hoverflies mimic bees or wasps in their appearance. The larvae vary considerably in both form and life-style, many are active carnivores, feeding especially on aphids, while others feed on dung, wood or by preying upon aquatic larvae.

Hoverflies have only two wings that are usually held in a delta shape when the insect is atrest. They have large eyes, which in the hovering male occupy most of the head, and generally short, knob-like antennae. 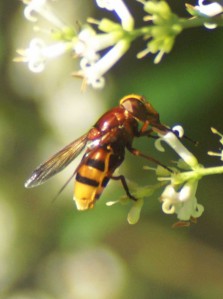 A large and very impressive hoverfly, with a wingspan of up to 45mm, and a large colourful body. The thorax is brown and the abdomen orange-yellow and banded with black. First impressions may be that it resembles a hornet, although it behaves like a typical hoverfly, frequently sunbathing then darting off.

Habitat: Most often seen in gardens and other flowery places; larvae probably live in wasps’ nests.

Status & distribution: Widespread & frequent on the continent,becoming rarer northwards. Used to be very rare in Britain; now well established but local in the South, varying in numbers.

A common and familiar species, noted for its mimicry of the male Honey Bee, the Drone fly is a largish insect, with a wingspan of 24-28mm. Rather hairy, it can be very variable in appearance, but basically is deep brown with two narrow whitish rings, and greater or lesser amounts of orange on the edge of the abdomen.

Habitat: A very wide range of habitats, occurring almost anywhere there are flowers.

Season: Can be seen in any month. Adults hibernate.

Similar in appearance to the Drone-fly, this is a slightly more slender hoverfly with a strongly tapering abdomen. There is one pair of broad yellow markings on the abdomen and the front legs are wholly orange.

Habitat: Found in a wide variety of habitats, wherever there are flowers. Larvae breed in wet, organically rich situations.

A common and familiar ‘ typical’ hoverfly with a wingspan of 20-24mm. The thorax is dark and unmarked, the abdomen is broad and roughly oval in shape with 1 interrupted and 3 uninterrupted yellow bands; females have entirely yellow hind femora.

Habitat: Most flowery habitats, such as rough grassland, hedgerows & gardens.

Widespread and common throughout. May to November. 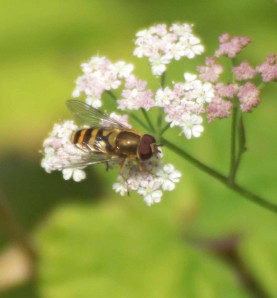 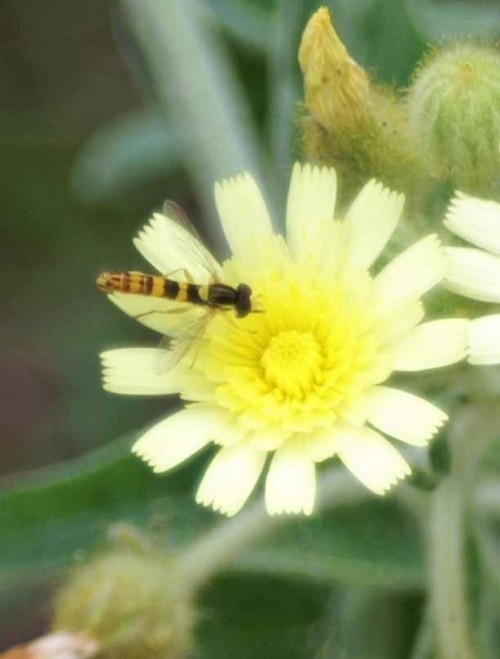 One of a group of similar small species, with a wingspan of 12-15mm. and a yellow edge to the black thorax.Abdomen is black and yellow: in this species the long abdomen projects noticeably beyond the wings. Markings are variable.

Habitat: In most flowery habitats including gardens and waste ground.