There is no doubt that orchids are very special plants that evoke interest in people that have less interest in more ‘ordinary’ wildflowers. We have been fortunate to come across a good number of different species in the course of outings made during the spring and early summer months, and all of those included below have been discovered and photographed in Cadíz Province and within the Alcornocales Natural Park or very close to it. There are still a few to add to the list such as the Giant Orchid, Bug Orchid, Spider Orchid and Lizard Orchid that I haven’t come across yet and some I’d like to get better photographs of. Maybe this year ….

All of the photographs are my own and the descriptions of the plants, habitats and other information are from either ‘Wildflowers of Southern Spain’ by Betty Molesworth-Allan or ‘Mediterranean Wild Flowers’ by Marjorie Blamey & Christopher Grey-Wilson.

The Mediterranean species of orchids are all terrestrial and have a more modest beauty than the epiphytic tropical species that grow from crevices and hollows in trees. Most are classed as perennial, but their appearance can be unpredictable and a plant flowering one year may not be seen again for several years. They have quite a complex life-cycle and several key factors play a part in their flowering success. Orchids have the smallest seeds of all the flowering plants; they are barely more than dust, although produced in great numbers and have no food-store, so are affected from the very start by the conditions into which they fall. The seed also needs  to create a symbiotic with a type of soil-borne fungus in order to germinate; the fungus assists the seed to build up nutrients that enable it to develop a root and create green leaves. The process from germination to the production of a flower may take as long as 10 years.

Orchids are pollinated by insects and many of the Ophrys species have evolved flowers that attract a specific species of insect, to the extent that they replicate the shape and pheromones of a female insect to draw in a male.

Tuberous perennials with hand-shaped tubers. Leaves decreasing in size up the stem, not sheathing the stem, the uppermost often small and bract-like. Flowers are borne in dense cylindrical or conical spikes, often with the bracts poking between the flowers; sepals generally spreading or the upper one coming close to the petals to form a hood; lip prominent, 3-lobed or occasionally unlobed, patterned with various lines or spots.

Flowering: March to May

The flowers resemble a tiny man

A rather slender perennial , rarely growing more than 40cm tall, often less. Basal leaves are oval, blunt, pale shiny green, erect at first; upper leaves are smaller, sheathing the stem; bracts are membranous and shorter than the flowers. The flowers are greenish yellow, often streaked or edged with red and borne in a long slender, lax spike. The sepals and petals form a close hood above the lip which is 12-15mm long, pendent, oblong with two slender ‘arms’ and two shorter spreading ‘legs’, resembling a tiny man.

Tuberous perennials with curious, often insect-like flowers; stock with 2-3 rounded tubers. Leaves are mostly in a basal rosette, but stems generally have one or two sheathing leaves. Flowers are borne in short to long, rather lax spikes, occasionally solitary. This is a complex genus with many variations; often several species can be found growing side by side and hybrids are common. The insect-like nature of the lip attracts males of specific insect species, stimulating them into pseudo-copulation, during which they pick up pollen.

Many of the Ophrys species may be common in some years but apparently rare in others. This may relate to the autumn/winter rainfall, insufficient moisture at this time may inhibit or prevent growth the following spring. The flowers are insect-pollinated, so rely on their specific insect’s presence to coincide with flowering times. 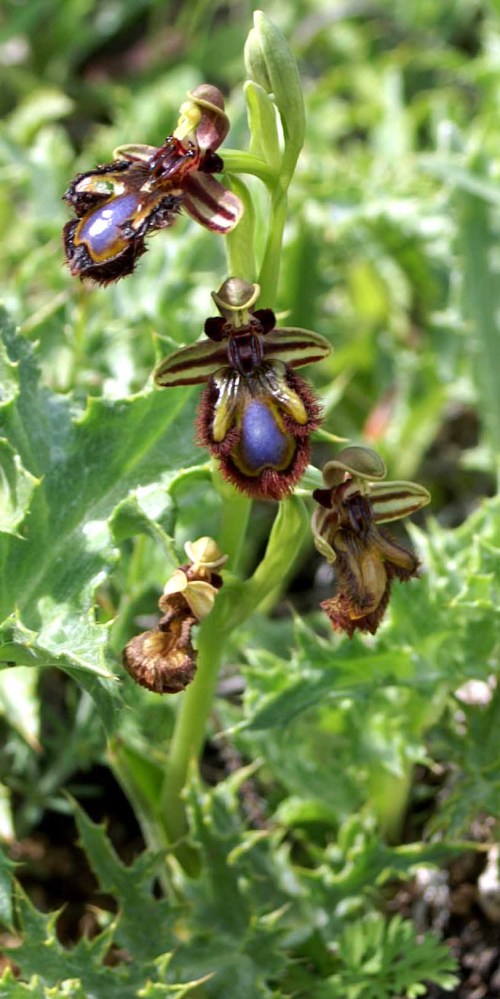 Flowering: March to May 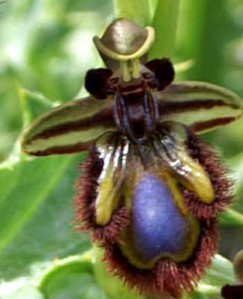 Lip has a large shiny, metallic blue speculum, or 'Mirror' 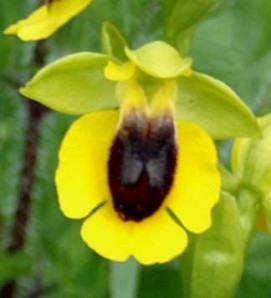 Close up of the insect shape

A low to short perennial, reaching about 30cm tall, but sometimes as short as 5-6cm. The basal leaves are oval and pointed; stem leaves are narrower, often rather short. Spikes generally bear 2-7 flowers. The sepals are green and the petals greenish or yellowish, linear-oblong and about half the length of the sepals; lip 12-18mm long, rounded to oblong , 3 lobed, with a broad flat, yellow margin surrounding a central reddish-brown zone, which has a narrow bluish-grey speculum. 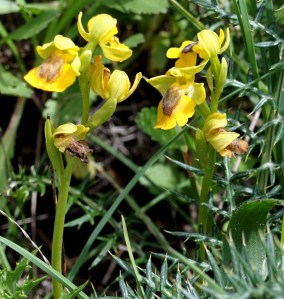 This species is widespread throughout the Mediterranean region, is often gregarious and has a wide altitudinal range from the lowland to the mountains. 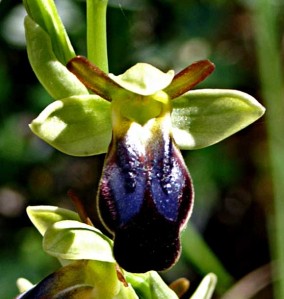 Flowering: February to May

Short to medium perennial growing up to 40cm high. Basal leaves are oblong-lanceolate and blunt, the stem leaves narrow and pointed. Spikes mostly bear 3-10 flowers; sepals are green, sometimes pinkish, oblong to oval in shape. Petals are green, linear, half as long as the sepals and more or less hairless. Lip is 9-15mm long, horizontal to downcurved, 3 lobed, purplish or yellowish brown, often yellow-edged; a bluish, greyish or violet-blue ‘W’ shaped speculum gives the appearance of two eyes.

One of the earliest species to flower the plants often forms large colonies but can still be difficult to spot immediately due to its sombre colours. Hybridises with O.lutea (Yellow Ophrys) 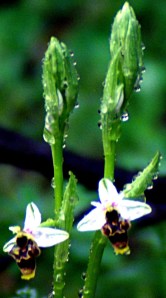 Flowers are variable in colour and pattern

Flowering: From March to May or June in the mountains.

An erect, slender orchid growing to about 30-40cm high while flowering, sometimes shorter, depending on growing conditions. The basal leaves are pale green, wide and pointed. Flowers vary in colour and pattern, but the 3 outer ‘petals’ (tepals) are mainly pink with a green central stripe; the 2 inner, smaller and narrower are all pink. The large lip (labellum) is usually dark red or purplish with a varying cream pattern, often in the shape of an ‘H’; the base of the labellum  may be pale yellow with an upturned knob.

Habitat: In basic soils and the rubble from hill or pathsides, often in surprisingly dryish places, also grows amongst low shrubs. They occur frequently, but often only one or two plants are found together.

Often the first of the orchids to flower, this is a tallish orchid that may grow to 15-45cm high or more. The leaves are basal and in a rosette, are ovate and rather pointed; the upper stem leaves are narrow and erect. The flowers are variable in colour, upper 3 perianth segments are bright pink to almost white; the lip-centre is velvety and the dark part , as well as the yellow margin is varying in shape and width. The base of the lip usually has a small portion that doubles up.

Habitat: Locally frequent, usually in basic soils, in dry grassy fields and banks, in the open or amongst bushes, woodland edges. From lowlands to hills.

Flowering: March/April-May, June in the hills 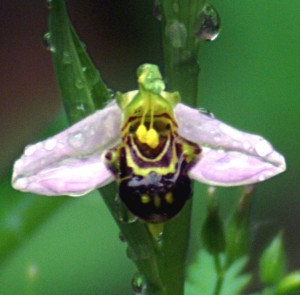 A short to medium perennial orchid that grows to around 50cm, very variable. The basal leaves are oval to lanceolate and blunt; stem leaves are similar but smaller. The flower spikes bear from 2-9, sometimes up to 15 flower-heads. The sepals are most often bright pink, from pale to purplish and very rarely, white and always with a green mid-vein. The petals may be green or purplish, are almost triangular in shape and less than one third the length of the sepals. The lip is 10-13mm long, brown or purplish brown, 3 lobed, the lateral lobes short and hairy, the central lobe with a short tip bent backwards. The speculum is basal, shield-shaped, brown or violet with a yellowish margin.

A low to short perennial, to 25cm tall, but often less. The basal leaves are oblong-lanceolate, forming a flattish rosette; stem leaves erect and clasping the scape. Spike bears 2-5 flowers; the sepals are green, occasionally whitish, are oval in shape and blunt. The petals are greenish with a purplish base, triangular and about one third the size of the sepals. The lip is small, 7-8mm long, 3-lobed with the lateral lobes deflexed in the middle and the central one with a terminal ‘tooth’; intense velvety-black to deep brown with a central bluish-violet, shield-shaped or 2-parted speculum.

FLOWERING: March to May

A slender, short-medium , tuberous perennial. Leaves are narrow-oblong to linear-lanceolate, pale green, channelled, decreasing in size up the stem with the uppermost small and bract-like. Bracts are linear-laneolate, generally purplish, slightly longer than the ovary. The flowers are borne in a cone-shaped (pyramidal) spike that slowly elongates to a cylindrical spike. Sepals and petals bright pink, purplish pink or rarely blood red or white; the lateral sepals are spreading, the upper sepal and the petals forming a small helmet.

Habitat: One of the most widespread and common of the European orchids, growing in a wide range of habitats including scrub, roadsides, mountainsides, occasionally in open pine woodland, rarely on sand dunes. The flowers are pollinated by butterflies and moths.