Despite the  seemingly inhospitable habitat provided by  dunes and other sandy areas close to the sea, a rich and diverse community of plants can still be found around the less-developed beaches, cliffs and coastal strip of the western end of the Costa del Sol located in Cadíz Province. Further along the coast, from Tarifa onwards, the virtually unspoilt beaches of the Costa de la Luz, examples of flourishing plant colonies are even better .

The habitat is undoubtedly a harsh one; there is no shade from the sun, no protection from salt-laden winds and the sandy soil retains very little water. The plants that do survive, and even thrive here, have evolved an array of effective strategies to combat the constant bombardment of the elements. Most plants have grey-green leaves or their leaves have been reduced to spines, some have a waxy coating, others produce a sticky secretion from their leaves and sometimes even flowers, that sand adheres to, providing another protective layer.

I am listing some of the plants I have photographed, noting where it was taken and also other locations I have found the plants, if applicable. 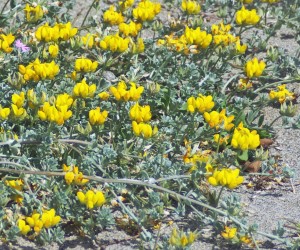 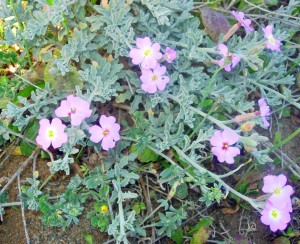 A branched perennial with stems and leaves white-woolly, giving the plant a silver-grey appearance. Flowers are palish pink to purple, with a white to yellow centre, 2cm-3cm across.

Habitat: Grows in coastal sandy and rocky places. I have found it both in Sotogrande at the back of the beach (behind water works) and on el Faro beach, Alcaidesa. 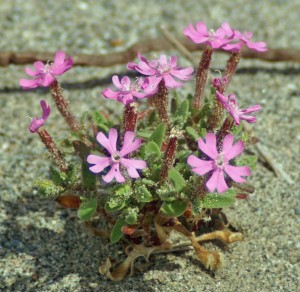 A low to short annual, up to 15cm tall, glandular-hairy, sticky, often covered in sand grains. Flowers rose pink, about 2cm across.

I have found it growing in Sotogrande, once again at the back of the beach behind the water works and more accessibly at Alcaidesa, el Faro beach; Cape Trafalgar.

Flowering: March to July, but usually has a few flowers most of the year.

Low growing, bushy, spreading perennial; rough to the touch. Flowers are golden yellow and 4-6cm across.

Habitat: Coastal; on steep banks, rock cliffs within the zone of salt-laden winds.

28/3/08-Alcaidesa, el Faro beach, part of a wonderful mass of the plants tumbling down onto the beach

Habitat: Mainly on coastal sands at back of beaches where it forms patches.

Once a very common plant, now only found on undisturbed areas of beaches, often with the pink-flowered Malcolmia and Matthiola species. The name gaditana is derived from the latin name for Cadiz (Gades), the ancient town built by the Phoenicians.

A member of the Broomrape family (Orobanchaceae), which are parasitic perennial herbs without chlorophyll.

An unusual looking plant, ths is a stout, erect, short to tall hairless perennial with a thick stem and scale leaves. The flowers are bright, shiny yellow, 30-40mm long and borne in a dense, cone-like spike.

Habitat: The photograph was taken in Sotogrande, at the back of the beach behind the water works, where it appears to be parasitic upon  Southern Birdsfoot Trefoil. I have also photographed the plant on dunes at La Paloma beach, Tarifa and at Cape Trafalgar.

Flowering: January to October, but mainly between February and July.

A lovely low-growing perennial or biennial herb about 30cm high. Flowers large, to 3cm across with the centre either rose-red or light purple, occasionally white or almost all blue; flowers open in the sun.

Habitat: In sand and other light soils, open places and shrubby ground, edges of country roadsides: coastal to hills. Also seen on dunes at Tarifa and Cape Trafalgar.