The Egrets have landed

This lagoon, very close to the entrance of Sotogrande Port and backing onto the beach, Sotogrande Playa, is not very big (approx 250x60m), but it is more or less surrounded by reed beds. It is home to a number of resident species of birds that you may or may not see, but one species can be relied upon to provide a regular spectacle: this is the spot chosen by hundreds of Cattle Egrets as their night-time roost.

In the fading light, a White wagtail perched on top of a reed stem in the centre of the lagoon.

I arrived at the lagoon this evening at about 6.15pm as the sun was beginning to go down and tint the sky rose pink. There was not the slightest breath of a breeze, the sea and the surface of the lagoon were almost perfectly flat and the reeds motionless. I heard the calls of Cetti’s Warblers, two of them that seemed to be communicating, saw Chiffchaffs aplenty amongst the reeds,watched White Wagtails dart after flies from perches on reed stems and Crag Martins that skimmed close over the water. But although the light was beginning to fade, there were no Egrets.

A sunlit Cormorant flying to roost

I watched the sky and saw Starlings set off for their roosts, Cormorants in ones and twos passed by hurriedly on their way across to theirs, somewhere upriver and then a single Egret heading my way. It flew in as though to land, but then looped around and flew back in the direction it had come from. Three birds together then did exactly the same thing, then three more. I was baffled by this, wondering if perhaps the water-level, which is very high at the moment, had covered the bank they roost on and forced them to seek alternative accommodation. 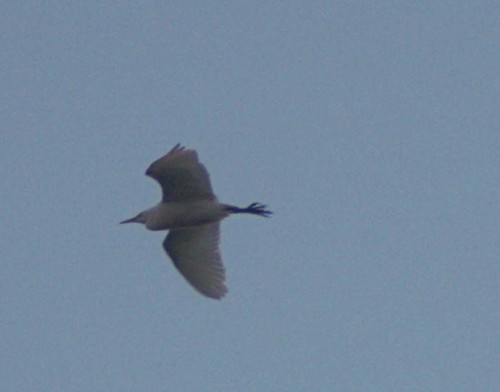 Then suddenly they began to arrive in larger groups, flying in quite fast then parachuting down at speed to settle amongst the reeds on the banks of the lagoon like large snowflakes.

A group flying in, legs extended, preparing to drop down to land

The first arrivals were landing in reeds in front of the buildings on the outer edge of the port; although closer to people, this is probably the most sheltered spot. As more arrived, some were slotting amongst those already there while others were spreading further round the bank. In a matter of two minutes the concentration of birds trebled and the noise level increased as the birds jostled for position. I thought back to the birds I had seen earlier and though it possible that they had turned back to wait until a number of birds had settled, seeking the greater safety and security of a large group. 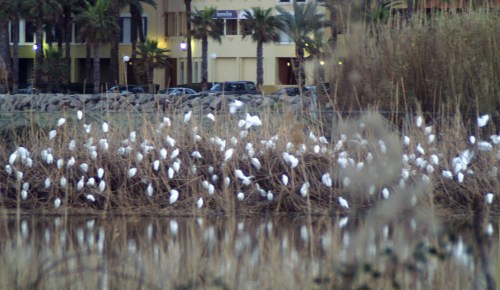 After a few minutes of watching I decided to walk a little further around the board-walk to try to find a clearer view and was surprised to discover a second, quite separate roost behind a flooded area of the reed bed that backs directly onto the beach.

A second roost, backing on to the beach

There were a smaller number of birds here, but still about 200-250 individuals. 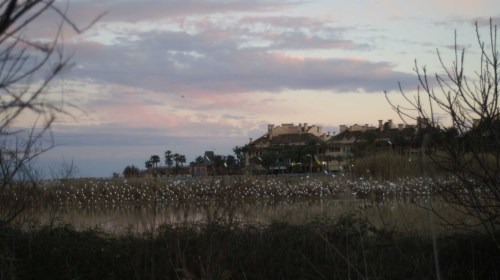 By 6.50pm the majority of the birds had arrived, although there were still small groups of new arrivals dropping in from the darkening sky

I stayed until it was almost dark and the birds were beginning to settle, although late arrivals set up protests and a few shifts of position. I’m not the best at counting large numbers of birds, but from rough counts from my photographs I would say there were at least five – six hundred birds in the two roosts, maybe even more. I have witnessed the sight on several occasions and it is always one worth making the effort to watch, even when it is as cold as it was last night. 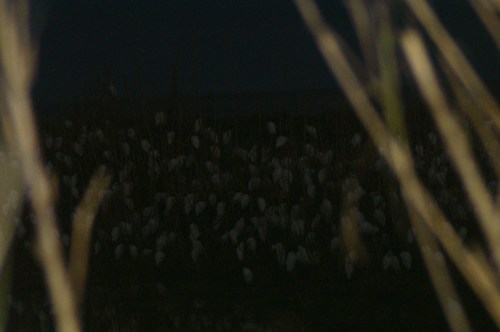 A last picture of birds in the almost-dark