The Sierra de la Nieves,  which literally translates from the Spanish as  ‘Mountain range of the Snows’, forms part of the Serrania de Ronda and rises dramatically above the surrounding valleys and countryside. The Natural Park covers an area of 30km by 20km, or 18,530 hectares; the peak is the tip of the ‘Torecilla’ at 1,919 metres. Historically, this was a place of refuge for highwaymen and outlaws, but today the Sierra de las Nieves is considered one of the best places in Europe for the study of nature.  The area was studied in the 19th century by Swiss botanist Edmond Boissier and in 1933 by Luis Ceballos;  in 1970 the park was declared a National Hunting Reserve and then in 1995 a Biosphere Reserve by UNESCO.

The annual (gonhs) outings to the Sierra de las Nieves have been one of the highlights of the last six years for me; it is a truly wonderful part of the world and the best place I have visited in this region, for the sheer abundance of wildlife. The mountain scenery is spectacular in its own right, but this is a haven for  a rich and diverse flora, which includes many endemic species, more butterflies and other insects than you can count from  a wide variety of species, an array of  birds, many of which breed here and it is home to Ibex, deer and other mammal species as well as reptiles, making this a magical place. The natural park covers  a vast area and a few hours of one day are hardly enough to scratch the surface of what is here.There is so much to find that you can hardly take more than a few steps without discovering a beautiful plant or spotting a bird or being awed by a view, so it’s impossible to go home disappointed, except perhaps that you have to leave at all. Having said that you can camp here too. 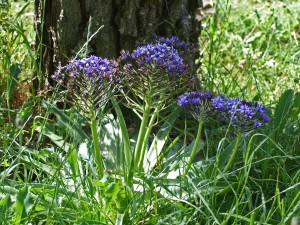 Arriving at the area recreativo, situated well inside the park, at about 10am it was already sunny but still coolish, perfect weather for walking. There are several options for possible routes to take, illustrated on painted sign boards, but today we knew we were heading for a trail we have taken before that would take us up a mountainside through pine woodland.

The first few metres of the track pass through a fairly open grassy area, where there were so many flowers calling to be photographed it would have been easy to spend a couple of hours in that one spot, but there was so much more to see we had to move on. There are a variety of tree species here, mainly pines and oaks, with an ancient species if pine and some special oak trees that have their stronghold here. The lower parts of the woodland we were walking through is comprised mainly of large Monterey Pines – Pinus radiata, that would originally have been deliberately planted. Higher up this introduced species gives way to the indigenous Pinsapo Pine-  Abies pinus. There are some huge ancient specimens of the Pinsapo in places within the park and many more young trees have been planted and nurtured to ensure its continued survival.

In 1837, during one of his exploratory visits to the south of the Iberian Peninsula, the Swiss Botanist Edmond Boisser discovered a new species of tree: Abies Pinsapo, popularly known as the Pinsapo pine or Spanish fir. Found only in the southern mountains of Andalucia and in the north of Morocco, botanists discovered that the pinsapo had been around since the Tertiary geological time period – predating  the Ice Age. The tree can grow up to 30m tall and live as long as 200 years. It has tiny needle-like leaves, which are extremely sharp and cylindrical in shape, and although this foliage appears lightweight, it throws out a very dense shade on the ground.

We followed the track as it wound up the mountain slope, carefully negotiating the network of exposed tree roots criss-crossing the path. We stopped a few times to try to see birds we could hear calling or caught glimpses of flitting around in the branches above us that were largely species of Tit, Great Tit, Blue Tit,Coal Tit and Crested Tit but also Chaffinches and Chiffchaff (maybe Iberian) with limited success. Reaching a spot on the track where an opening in the trees allowed sight down  a slope we had more luck. There were a couple of large, dead trees here where we had a Serin singing, a Chiffchaff, a Great Tit with a beak full of food and best of all a beautiful male Redstart. It was apparent that the birds here were all still in the process of raising families, a good couple of weeks behind those at our lower altitude.

A little further on we stopped for a refreshment break and across the valley saw a flock of Chough take to the air; 50-60 birds were estimated and we found out later that other members of our party exploring over there had watched them flushed out by a pair of Golden Eagles. 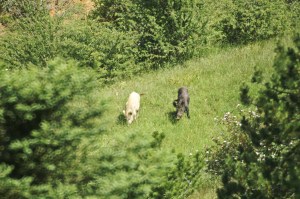 Sadly we missed the Eagles in action and had to settle for a nearer sighting of a Booted Eagle (LP) and in the valley below us a family of pigs, which several people wanted to turn into wild boar, but although one of them was dark coloured, the other was very beige!

We climbed a little higher, rounding a bend onto a more level section of the trail where it loops around the side of the mountain. We upset a pair of Nuthatch here that were at great pains to let us know how much they resented our presence with much fierce scolding. A bird was singing too, but we did not recognise the song until we heard it again later and saw it was that of a male Redstart. Standing still for a few minutes to listen, I also had a very close view of a Crested Tit foraging in vegetation just a metre or so away. Moving on to catch up with the others I heard more scolding, this time from a Wren that had a very large larva,( or is it a slug?) in its bill, so large I’m amazed it could get any sound out at all.

On the opposite side of the track more scolding – this time from the Nuthatches again that clearly had their nest near the top of another dead tree. Then more telling off from a very nearby Robin, whose picture I tried to wait  for as I could already see this year’s Christmas card of him perched in a Pinsapo… no luck there though.

At this point we realised that we had long been deserted by anyone who had any idea where we may be heading and tempting thought the trail ahead appeared, we decided we had to get off it and take a ‘short-cut’, (not my words!), that involved scaling a very ill-defined loose shale track, probably made by sure-footed goats, that would take us higher up our mountain and meet up with the surfaced track that would take us back down to the bottom of it. 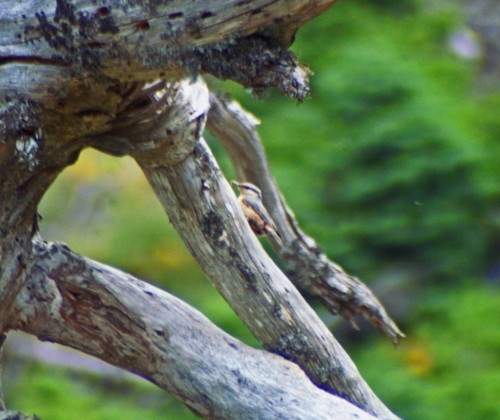 The track passed around the dead tree where the nuthatches had their nest and I couldn’t resist stopping for a few minutes to watch them.

Although parts of the track felt a bit loose and hazardous, it was beautiful, with flowering plants, shrubs and trees set amongst weathered and lichen-covered rocks – a perfectly artlessly designed rock garden.

2/6/06-Blue Hedgehog broom -erinacea anthyllis. Evident today but almost at the end of its flowering 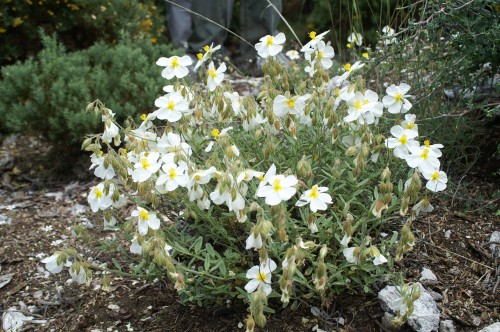 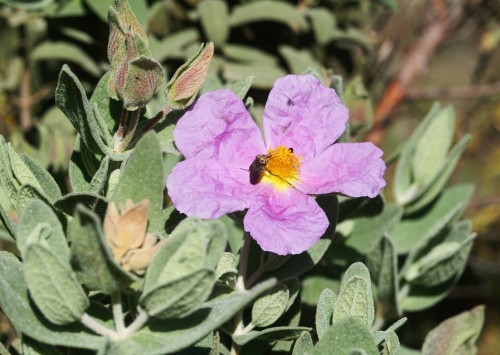 Approaching the top of the slope we had this wonderful view.

Reaching the top of the slope we stopped to recover from our exertions to eat our lunch and to admire the fantastic views in front of us; panoramas of the mountains and valleys of the Sierra de las Nieves, the wider Serrania de Ronda and way beyond even that – mountain ranges continue to the far horizon and probably beyond.

We did find the road and met up with some of the members of our group that had left us previously to walk to the real top of the mountain as they were on their way down. This was where we discovered that our previously unrecognised singing bird had been a male Redstart; one was singing from the very top of a Pinsapo pine in front of us but growing from lower down the slope, so we had a very good view with binoculars. It was too far away to photograph well though.

This part of the mountain is completely different to the side we had just left; to one side of the winding track there were high rocky cliffs while on the other side the land fell away and was well vegetated with Pinsapos pines, shrubs including gorse, cistus and lavender. This is the habitat preferred by the Black Redstarts, Rock Buntings and Wheatears that often choose clefts in the rocks to nest in.

We had several sights of Black Redstart males singing from the tops of the rocks on the ridge and a lovely view of a pair of Rock Bunting that sat on a rock while being summoned by their offspring perched in a small Pinsapo pine above them. One of the pair flew up the slope to a rock very close to us and posed quite nicely, I think it was the female as her colouring, although similar to that of a male was  slightly more subdued

There was a lucky, very brief glimpse of a male Northern Wheatear here too. 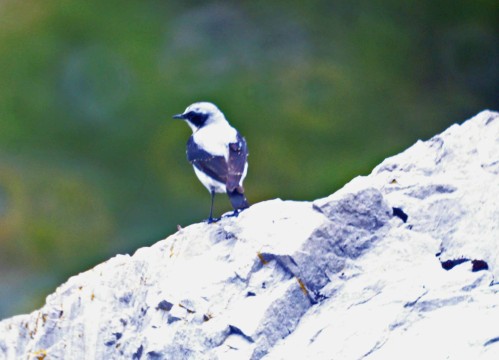 The afternoon had become much warmer and as we reached the bottom of the slope where there are areas of grass and wildflowers we began to see butterflies. At first just a few, all flying around rapidly, we quickly noted Marsh Fritillary, Spanish Gatekeeper, Marbled White, Common Blue, Clouded Yellow, Cleopatra and Meadow Brown, none of which settled for long enough to photograph. Further on there were more, a Wall Brown basking on the road, numbers of Marsh Fritillaries, a Black-veined White, a Small Skipper and a lovely Scarce Swallowtail that glided gracefully around flowering shrubbery but didn’t stop.

I would have loved to be able to stay chasing butterflies for longer, but it was time to go home and rest up the anticipated aching muscles.

Final bird, butterfly and moth sightings for the day from our group as a whole: