High Noon on the Garden Wall

One hot sunny July morning a little before noon a large, dark-coloured gecko climbed the garden wall then settled in a sun-dappled spot on the top amongst the honeysuckle; the perfect spot for a siesta. He was surprisingly well-camouflaged here, despite being dark brown and on a white wall. His skin was a similar texture to the surface of the wall blocks and in the dappled shade surrounded by honeysuckle stems and leaves he was well sited to snap up any unsuspecting nectar-seeking insects.

A large dark gecko on the garden wall

The gecko’s peace was short-lived however, as minutes later a smallish skinny Wall lizard appeared, climbing up the wall and seeming not to have noticed him stretched out on its top.  The gecko spotted his approach and edged forward slightly. I anticipated trouble, but the lizard spotted the movement and skittered sharpishly over the wall out of reach. The gecko settled himself back down.

The Wall lizard hurrying past the gecko

The lizard had had a lucky escape, but fate wasn’t finished with him yet, he would soon discover that bigger trouble awaited him on the other side of the wall…

He seemed to have crossed over the top of the wall then travelled along it until he was behind the gecko, as a couple of minutes later I spotted movement amongst the leaves and aimed the camera there, anticipating seeing his little head emerge. The leaves began shaking violently and I  briefly glimpsed the lizard, who appeared to be struggling to reach the top of the wall. Suddenly, he shot out from cover with another lizard, a larger version of himself, in hot pursuit. He almost made it back over the wall, but his pursuer grabbed his tail, pulling him back. 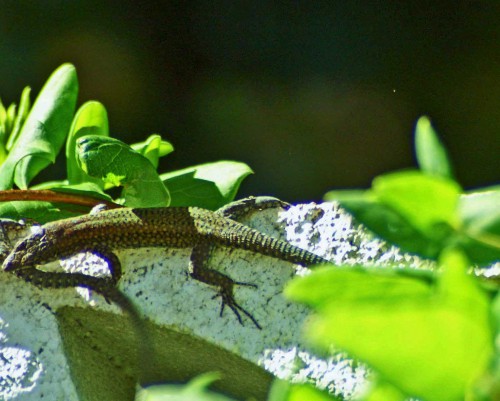 A fierce struggle ensued, the captive lizard twisting and writhing desperately trying to escape, whilst his captor hung on determinedly.

The captor hung on whilst the captive struggled to get free

Somehow the little lizard managed to break free and raced away with his tail intact.

The gecko seeming rather disgruntled to have been disturbed by the lizards’ kafuffle and set off back down the wall to seek a more peaceful spot.

The gecko set off back down the wall

Male Iberian wall lizards are somewhat territorial and in fights  combatants will grab for the root of the other’s tail. The lizards can shed the most part of their tail and if it is possible they will do so to escape as they are able to grow another. However, if the aggressor manages to grab his victims tail nearer its root, escape is more difficult. Larger lizards may also prey on smaller ones.

The gecko in this drama is a Moorish Gecko – Tarentola mauritanica. You can see from its tail that it has lost it before as it has lost the original ‘bumpy’ scale covering of the original. The colours of individuals changes in intensity according to the light. When they are active by day their colour is darker than during the night.

The Moorish gecko and Iberian wall lizard will drop their tail if threatened or if their tail is grabbed. This tail dropping type of defense is called autotomy  and they are designed to do this, with special connective tissue in the tail that creates a “weak spot” where the tail breaks off readily. The blood vessels to the tail will constrict, so very little blood loss occurs.

The dropped tail will continue to move -wriggling and twitching on the ground which acts to distract the predator, allowing the gecko or lizard to get away while the predator is left holding just a tail.

Although geckos and lizards are able to regenerate their tails, the new version is not an exact replica of the original. Research has shown the new tail  “has a single, long tube of cartilage rather than vertebrae, as in the original. Also, long muscles span the length of the regenerated tail compared to shorter muscle fibers found in the original. ”

“These differences suggest that the regenerated tail is less flexible, as neither the cartilage tube nor the long muscle fibers would be capable of the fine movements of the original tail, with its interlocking vertebrae and short muscle fibers,” Fisher said. “The regrown tail is not simply a copy of the original, but instead is a replacement that restores some function.”

2 responses to “High Noon on the Garden Wall”