I’ve never been able to resist collecting seashells and must have picked up hundreds of them in my lifetime, although now I take photographs of them rather than take home the real thing. I used to be content to pick them up just because they were pretty, then I began to learn to identify the more common ones and travelled to places where there are different shells to discover and that encouraged me to try to learn a bit more about them. I don’t want anything too complex or scientific, a name and maybe which group they belong to is enough for me, although it’s a bonus if I come across any interesting folklore or past uses for any of them.

There is not a huge variety of seashells washed up on our local beaches at this Atlantic end of the Costa del Sol, particularly those fronting Sotogrande. However,  if you  continue walking along the beach from Sotogrande towards Gibraltar until you arrive at Alcaidesa, that stretch is often more fruitful, so as it is geographically the same beach, I’m including in my collection shells that I’ve found more frequently there.

The most common and numerous shells are sturdy Cockle shells, that range in colour from pale cream to dark brown and all shades between. Frustratingly I have not been able to find a satisfactory identification as to the species of Cockle, but the best I can come up with is that it’s most like a Prickly Cockle. The vast majority of shells I’ve found do not have obvious spines, but some, as the one in the photograph have little bumps at intervals along each rib that may well be the remains of spines. The other difference these shells have from the descriptions I found of the Prickly Cockle is their colour, which is generally said to be ‘yellowish-white with light brown mottling’. I’ll keep working on it.

Length up to 80mm. A bivalve with the typical scallop-shaped shell, quite solid and rounded, with the left valve slightly more convex than the right. There may be up to 25 pronounced radiating  ribs with finer ones between and the channels between the ribs are as wide as the ribs themselves. Colouration ranges from yellowish-white to magenta. Lives in sandy or muddy substrates. 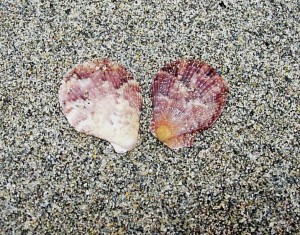 Length up to 70mm. A bivalve that looks delicate but is quite robust. This scallop has a rather elongate-rounded outline with a pronounced basal projection on one side only. There may be up to 35 ribs that are wider than the interspacing channels. Fresh shells have pointed projections or spines on the ribs; these soon erode. Colour is very variable and may be yellowish-white to magenta, sometimes mottled. Left and right valves have the same colouration.

Length up to 100mm. A very familiar bivalve mollusc, which is shaped like an elongated triangle and is fairly thin-shelled. The outer  surface is generally blueish black and marked with strong concentric growth ridges, while the inner surface is smooth and a pearly blue -white. Lives attached to rocks in shallow water, is widespread and very common.

Length up to 7cm. One of my favourite shells, this one I actually found on the little beach at Casares bahia. Sometimes known as the Ear shell which describes its shape, a rather flattened, oval. The shell is almost semicircular in outline with 6-8 large, open respiratory holes. The upper surface is ridged and brown while the underside has a beautiful irridescent mother- of- pearl coating. Widespread and common.

A fairly high flat shell with diverse tightly grouped fine ribs and an irregular wavy margin. The exterior of the shell can be green, brown, red or violet, while the interior has irregular dark stripes with a blue mother-of-pearl scar. Their habitat is on rocks , usually on relatively horizontal surfaces on the upper half of the middle shore.