I hear Jays most mornings as they make their way around the neighbouring trees calling noisily to one another, and although I’ve had glimpses of them I haven’t had a really good view of one for ages, so I was very happy to see one call in for a quick drink at the bird bath this morning. They are such beautifully marked birds and are intelligent and full of character, it’s a pity they have the cannibalistic trait that make them a threat to the smaller birds.

Occasionally a Jay will stay to bathe and turns a visit into a proper spectacle, it is such an amusing sight to behold that I’m putting in some pictures I’ve taken before when I’ve caught them in the act.

A Jay creating a maelstrom 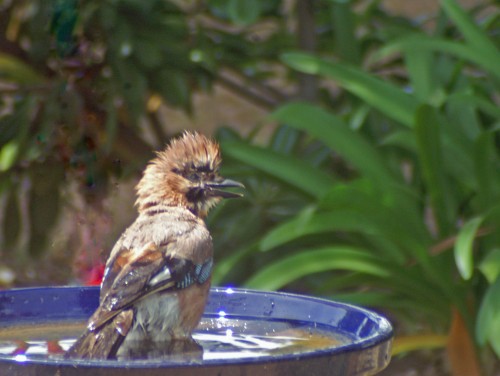 A refreshed Jay with a new punk hairstyle

In need of a change of scenery and some fresh air we decided to take a drive up to the old town of Castellar this afternoon. From Sotogrande we drove along the scenic A-2100 road to meet the A-405 San Roque – Jimena Rd, turning left towards San Roque then right on the roundabout that is signposted la Jarandilla (CA-9201) and very helpfully also has a pictural sign of a castle . The road passes through cork oak woodland that is on the eastern boundary of the Alcornocales Natural Park. We often walk here in the area I describe as ‘la Almoraima’, but today being a Sunday and a sunny one at that, meant the popular venta was very busy and the car parking area was full, so we carried on past and up the narrow winding mountain road to reach Castellar.

Early spring wildflowers are beginning to colour the roadsides; there are large patches of pretty blue periwinkles and in sheltered spots the sunny yellow flowers of Teline, or Southern Whin as it is also known are out. 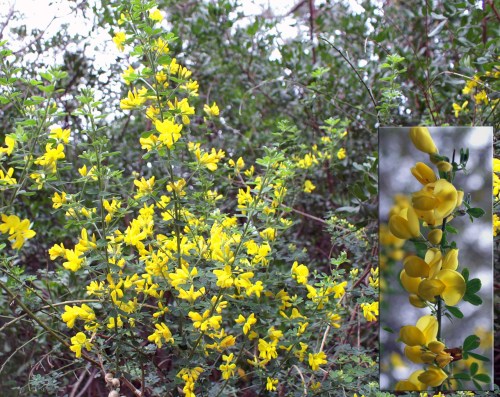 A view of Castellar town from the valley below

The views from this road are stunning, particularly to the left as you travel upwards, when you have views of the huge reservoir or embalse de Guarranque, backed by mountains.

View of the reservoir, embalse Guadarranque, from Castellar town wall

Castillo de Castellar was an early 13th century Moorish castle, built high on a hilltop about 15kms inland from Algeciras. The old town of Castellar de la Frontera, which includes the castle, was inhabited but pretty much deserted in the 1970s when the new town Nuevo Castellar de la Frontera was built some 5kms distant. It was subsequently repopulated by a number of people, originating mainly from central and northern Europe, who were seeking an alternative lifestyle. 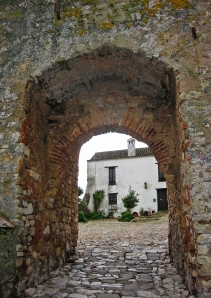 View through the archway leading into the enclosed old town

Today the walled ‘town’ is dramatically different and is more or less a holiday resort; much cleaner, painted up and in a better state of repair than previously, I think it has also lost much of its character. The old castle has been converted into a smart hotel and many of the old cottages upgraded to chic ‘casas rurales‘ or holiday cottages, so walking around the narrow cobbled alleyways now makes you feel like a bit of an intruder. On the plus side you can go into the hotel, buy a cup of coffee and take it outside to an open terrace that has wonderful views. The place gets busy at the weekends, I think mainly with people who have enjoyed lunch at the venta down below and then driven up to admire the spectacular 360° panorama of scenery spread out beneath from this accessible viewpoint. The views are breathtaking, extending to Gibraltar and beyond to Africa, around to the Sierra Bermeja and the Sierra Ronda and across the reservoir to the rocky peaks beyond. You are still within the boundaries of the Alcornocales Natural Park here, and the surrounding area is quite hilly and rocky, but few of the peaks exceed 350m in height.

This is often a great place to get close-up views of Griffon Vultures that sometimes may be just a few metres above your head, although there were none to be seen today. We have also had good sightings of Blue Rock Thrush and Crag Martins are resident here but spend the winter months lower down nearer the coast; they’re not back yet, but doubtless will return very soon. In the front wall of the castle (sorry, hotel) are numerous holes, many of which are occupied by pigeons, but some are historically the nesting sites of a small colony of Lesser Kestrels. Prior to the breeding season it is possible to catch sight of these beautiful little raptors around the railway bridge on the A-450 that is located just before the turning to San Enrique and almost adjacent to the bridge that crosses the river Hozgarganta; we believe they must be from the colony that breeds up at the castle. The bridge is a tricky place to stop to  look over its edge as the road is fairly constantly busy, but there is a track to one side that you can pull in to and then walk from. I was lucky one February morning: I left home early to pick up my friend from Jimena and as I was driving a 4 x 4 that is higher up than a ‘normal’ car, I could see over the parapet that two kestrels were sitting on the power cables that cross the railway track. There was very little other traffic, so I managed to stop and take some quick shots from inside the car.

The adult male Lesser Kestrel differs from the Common Kestrel in having blue-grey greater secondary coverts, an unmarked rusty-red mantle and in his less patterned underwings.

The female is very similar to a Common Kestrel female, but has a shorter tail, usually with slightly projecting central feathers and also paler underwings.

We took the short walk (signposted) from the road along the old cobbled track that leads to an old well. Both sides of the track are vegetated with cork oak trees, wild olive trees, lentisc mastic, dwarf palms and various other ‘scrub’ plants. Every few metres we walked we seemed to disturb a bird, I had glimpses of a Robin, several Sardinian Warblers, a Blackcap and Blue Tits. I heard a Chaffinch singing from a cork oak tree, but couldn’t spot him. 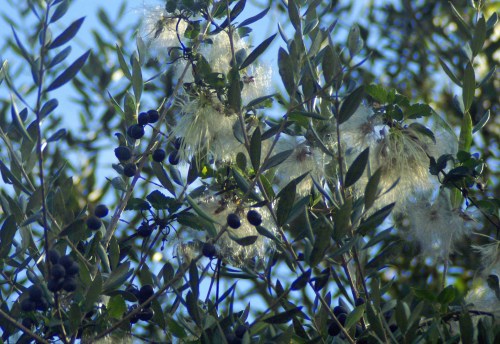 Ripe wild olives and the feathery seedheads of December clematis 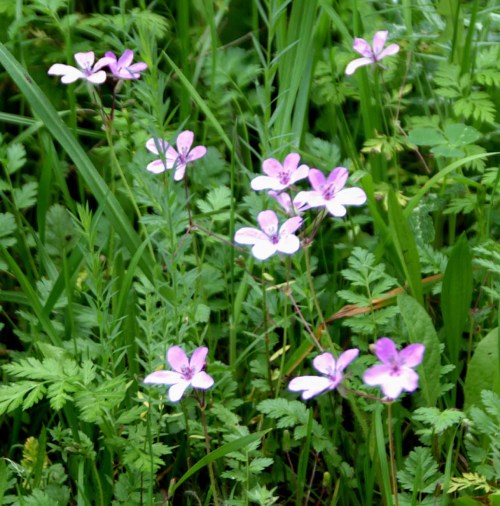 A little patch of pretty pink Andaluz  Storksbill pushed through on a grassy bank; this is the plant that becomes conspicuous on roadsides where it can form large patches in early spring. It is generally a common plant from lowlands to hills, that thrives in sand, gravel and grassy fields, is found amongst scrub and in light woods.

Walking back up the track we spotted two birds high up above the castle, very pale undersides made my first thought Lesser Kestrels but I couldn’t be sure until we reached the front of the building and they were directly overhead with a third bird, calling distinctively. 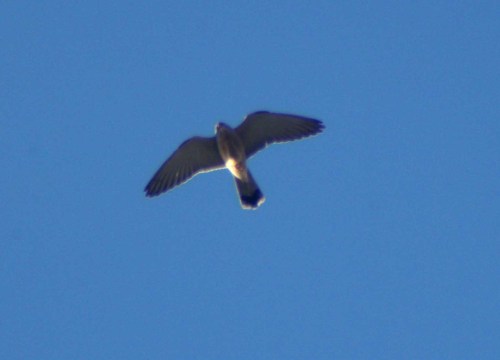 Hopefully they will be joined by more and the breeding colony here will continue.

PS – I was reliably informed that the Kestrels were seen flying into at least two of their nest sites just the day before, although they were apparently having a bit of trouble with squatting pigeons.