I can’t think of  a better way to start a Sunday morning in March than to have an al fresco, or should that be an al aire libre, breakfast with friends in the Plaza of a Spanish Pueblo Blanco in the sunshine. Unless that is, you have all of the above with the added indulgence of some brilliant birdwatching without having to stir from your seat, which surely makes it almost blissful.

The Coat of Arms of Jimena features the Castle

Our breakfast venue is located in Jimena’s Plaza de la Constitutíon, the central large open public space that is typical of most Spanish towns and villages. The Plaza has been modernised and is attractively paved and furnished with trees, including Seville Oranges some of which currently have fruit and exquisitely-scented blossom, around its edges. The surrounding buildings are original, with whitewashed exteriors as befits a Pueblo Blanco and mostly used as commercial premises. The standout feature of the Plaza in more ways than one, is the tall historic Torre Campanario, or Bell Tower. More about that later, first, breakfast. 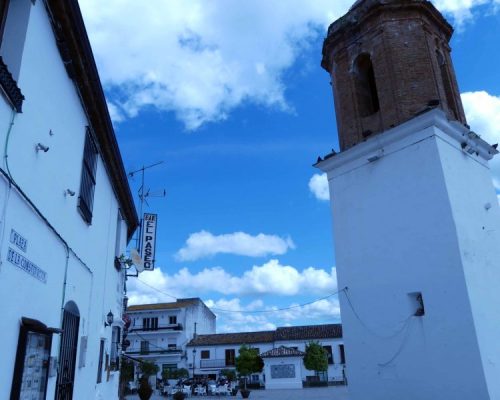 We headed for the Bar de Tapas Pastor 2, perfect for us as it has plenty of outdoor tables – who wants to be indoors on a sunny, if cool Spring morning? And as I mentioned earlier, this is a great spot for birdwatching. Jimena lies beneath one of the main flying routes of vast numbers of migrating birds, many of which at this time of year are returning to their breeding grounds after wintering in Africa. Whilst chatting and waiting for breakfast we had already seen overhead White Storks, three Booted Eagles and a Short-toed Eagle. At this point, not far from their crossing point over the Straits of Gibraltar, and at this time on a cool day the birds are flying relatively low and seeking thermals that will lift and carry them without the need for energy-consuming wing flapping. Perfect for some close-up views with binoculars.

Breakfast arrived; huge slices of toasted fresh bread with garlic to rub on it before sprinkling with olive oil and loading it with jamón, queso and luscious flavourful sliced tomato sprinkled with herbs. All this accompanied with fresh orange juice and cups of good café con leche that looks milky and innocent but delivers an effective awakening caffeine hit. Simple but perfect. And served by the attentive proprietor who seemed to think we needed  feeding up and kept offering us more! 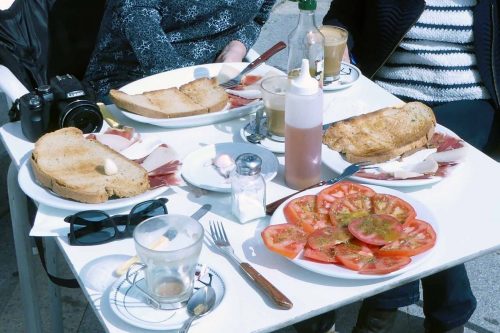 From our table we had an uninterrupted view to the afore-mentioned Torre Campanario – the Bell Tower, which we were watching in anticipation of seeing some of the special birds that return here each Spring to take up residence and raise their families alongside the pigeons: Lesser Kestrels. 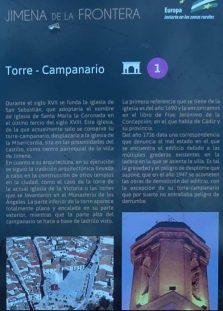 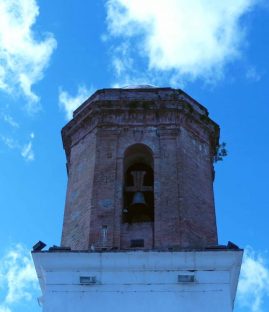 The information in Spanish, loosely translated, tells that the Tower is all that remains of a former church. The first reference to the Church is from 1690 and found in the book of Fray Jerónimo de la Concepción, where he speaks of Cadiz and its Province. The original building was founded during the 17th century as the Church of San Sebastian, which was changed to the Church of Saint Mary in the last third of the 18th century. In 1736 records show the poor state of the building due to the deterioration of the multiple layers of clay of the slope on which the town sits. Such was the gravity and danger of collapse that the building was demolished in 1947, leaving only the bell tower which remained sound. 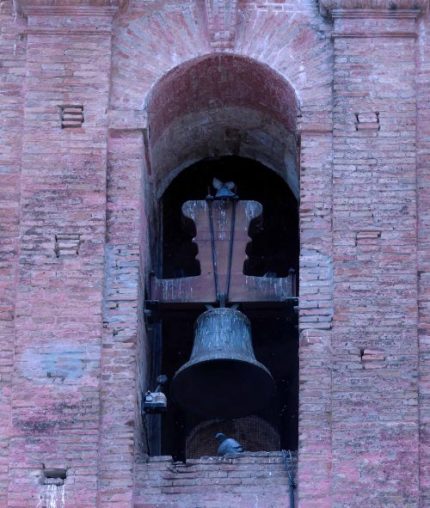 Construction of the Tower followed the architectural tradition of other churches in the area, such as the Tower of the present Church of la Victoria and the towers that rose in the monastery of Los Angeles. The lower part of the Tower is completely flat, rendered and whitewashed, while the upper part of the Bell Tower is made from brick. My observation: Those bricks are tiny and must have taken a lot of work to manufacture and to lay. There are other decorative embellishments around the top of the Tower which have been worn down over time but are still visible if you look closely. I love the colours and textures of this ancient construction.

Back to the present and we were delighted to see the Tower now had living embellishments in the shape of a pair of beautiful Lesser Kestrels. 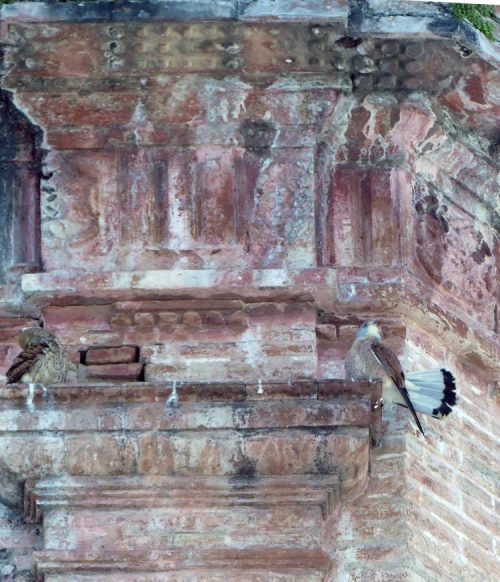 Lesser Kestrels are summer migrants to Iberia, returning to breed here during March/April after wintering in Africa and south-east Asia, where most will return in August/September. They are gregarious birds that nest colonially and there are often several pairs flying around and in and out of the Bell Tower here in Jimena, but today we saw just this one pair. No complaints though as the lack of numbers was more than made up for in the quality and length of the sightings we had today, giving us the perfect opportunity to get some brilliant close-up views. 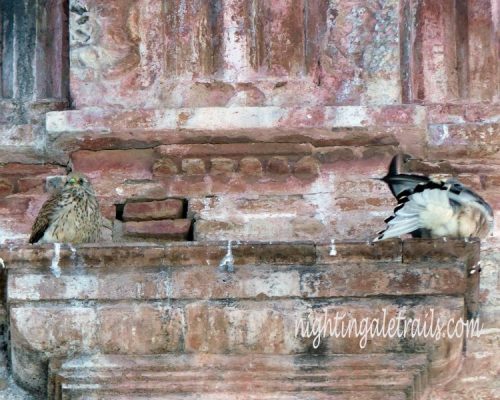 Small birds of prey, the Lesser Kestrel closely resembles the larger Common Kestrel but has a proportionally shorter tail and wings. 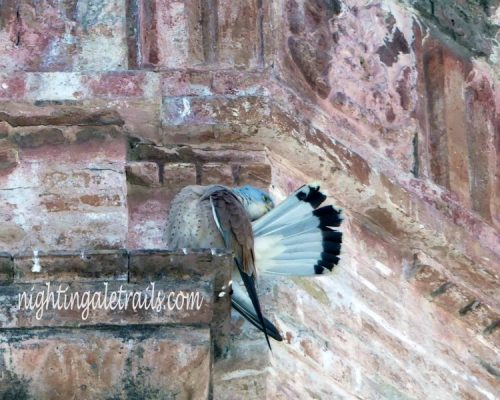 The male was absorbed in some intense preening which gave us some lovely close-up views of his fanned-out tail feathers. In the next photograph you can see some of the grey patches in his wings and that the talons of his outstretched foot are a creamy yellow colour, a diagnostic feature of this species that you don’t often see; the talons of other falcon species are dark in colour. 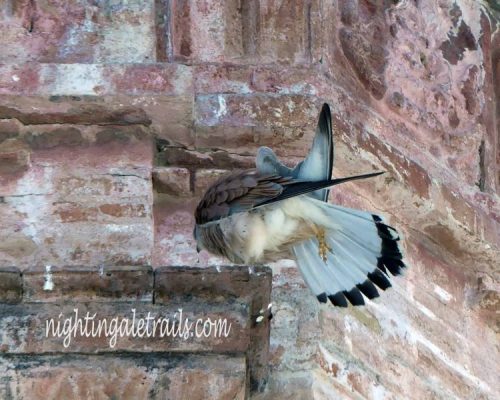 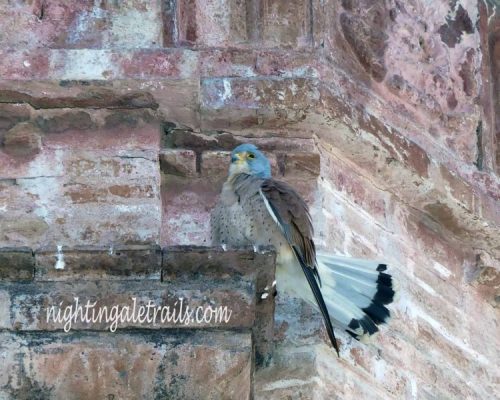 The female Lesser Kestrel is larger than the male. She may weigh up to 170g, he around 130g. She too resembles the female Common Kestrel but she and the young birds of this species are slightly paler. Their differing calls and size may (or may not) help to separate them out in the field, but their behaviour and location are often the most help. 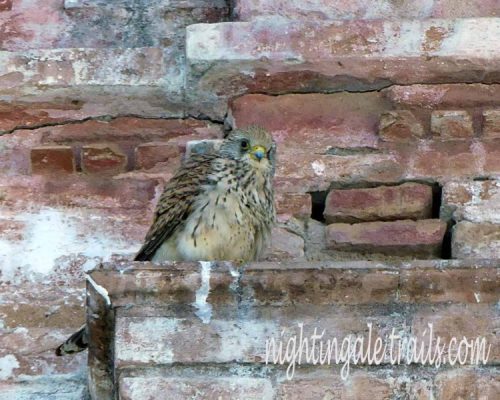 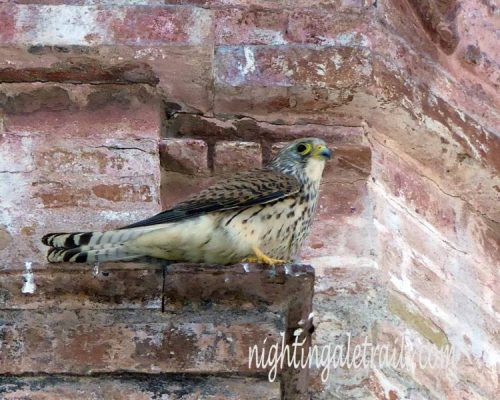 From their behaviour it would seem likely that the pair haven’t nested yet. It’s still quite early in the season and there may well be other members of their colony still to arrive back. 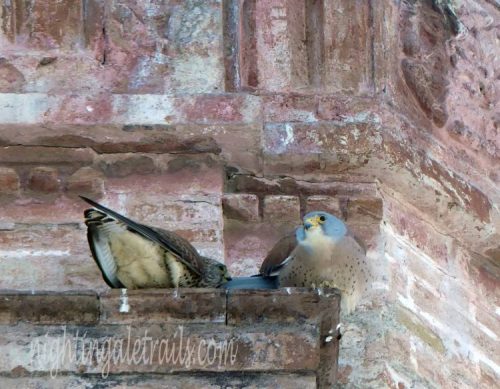 What a beautiful couple they made. Let’s hope they went on to raise an equally beautiful family and that they will make this spot their Summer home for many years to come. 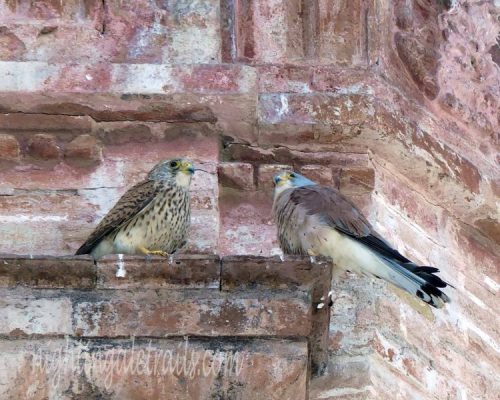 Lesser Kestrels breed throughout the Mediterranean region and across to Central Asia. They are found in a variety of habitats including Steppe, farmland and in towns. Globally the species is widespread and plentiful and is classed by the IUCN as of Least Concern. However, throughout Iberia, where they were once an abundant breeding bird, Lesser Kestrel numbers have declined sharply during the past 30 years. It would seem likely that this is due to the increased use of insecticides on both breeding grounds here and in their African wintering areas. The bird feeds largely on insects and a marked reduction in the availability of this prey would undoubtedly have a huge impact on them.