In Greek mythology, the Asphodel is one of the most famous of the plants connected with the dead and the underworld: the Asphodel Meadows is a section of the ancient Greek underworld where ordinary souls were sent to live after death. The Oxford English Dictionary gives Homer as the source for the English poetic tradition of describing the meadows of the afterlife as being covered in Asphodel. The flower has been referenced by many romantic post-Renaissance poets including Milton, Tennyson, Longfellow and even more recently, Leonard Cohen.

Members of the lily family, Asphodels are tall elegant but robust plants with tuberous roots and leafless stems rising above tufts of leaves that are long flat and narrow and taper to a point. The flowers are starry and white There are several species that look similar to one another, but in Southern Spain and Gibraltar the two most likely to be seen are the Common Asphodel and the White Asphodel.

Mainly a lowland plant, the Common Asphodel can be found in a range of habitats including coastal, light woodland, roadsides, rocky slopes and garrigue. 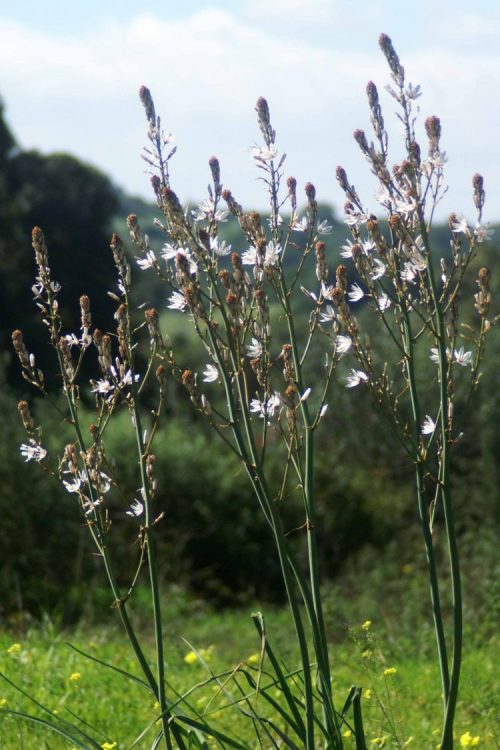 A medium to tall plant that often reaches up to 1m high. It has tuberous roots, which provide a firm anchor and store moisture. The leaves are long flat and strap-like, keeled beneath, 12-30mm wide and grey- green in colour. 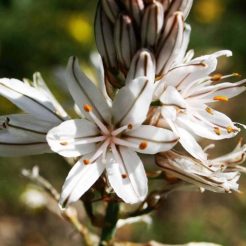 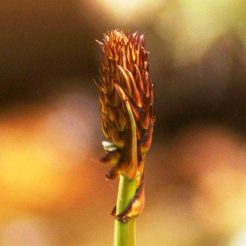 The flowers are held in a much-branched inflorescence that puts me in mind of a slightly wonky candelabra; individual flowers are star-shaped, white and has 6 petals, or tepals,  each striped with a pinky brown midvein. Fruit is a small oblong capsule, less than 1cm across. 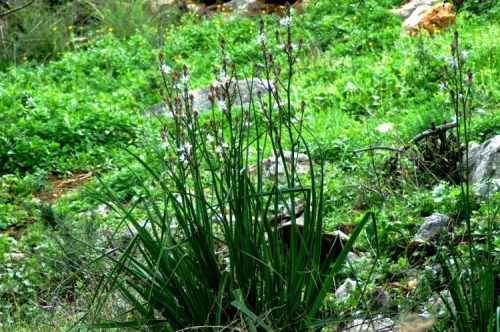 One of my all-time favourite sights of Common Asphodel is this one taken at El Faro, Alcaidesa where the background is of gloriously scented golden gorse, blue sky and an even bluer Mediterranean Sea. 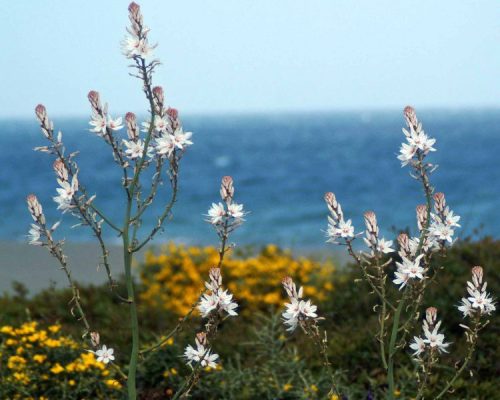 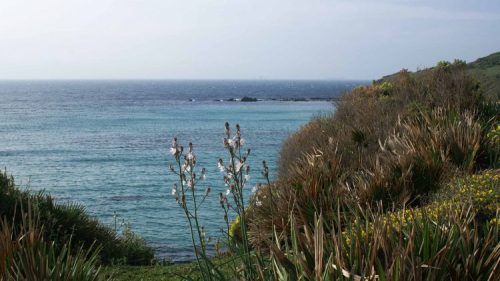 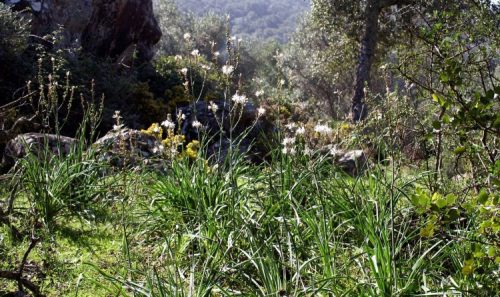 Common Asphodel can sometimes be seen covering large areas of open uncultivated fields. It’s unpalatable to animals, which graze around and between the plants; spot the cow doing just that in the left of the photograph below. 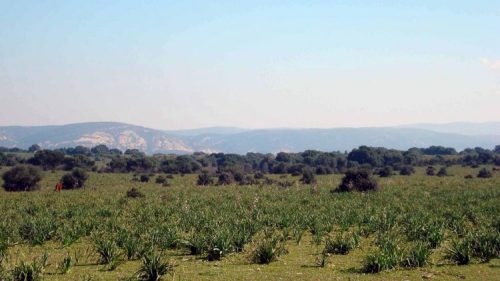 I love this glimpse I got of a Cattle Egret tiptoeing stealthily through the forest of leaves. 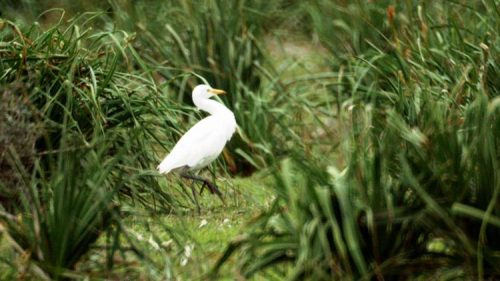 The White Asphodel also grows in a variety of habitats, in seasonally damp places, open woodland, meadows at low altitudes and is commonest in the hills and mountains. 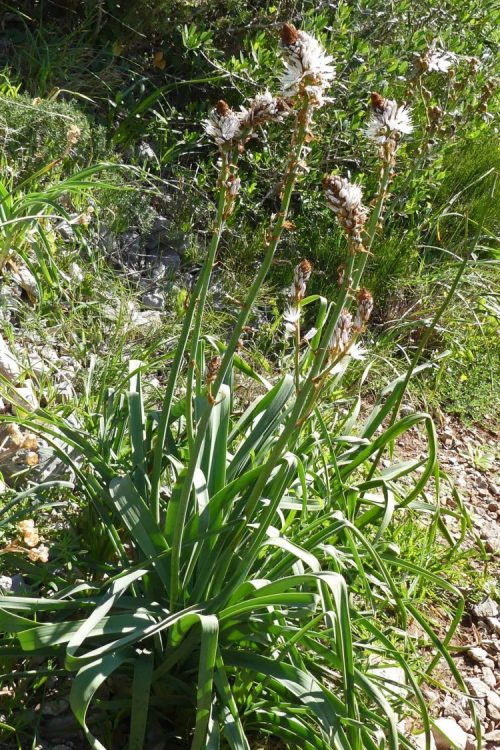 Similar in stature to the Common Asphodel, White Asphodel also reaches heights of up to 1 metre tall and has tuberous roots. The leaves are basal, linear, slightly grey-green, channelled and taper to a point at the tip. The flowers are borne in a dense, simple spike-like raceme; individual buds have a narrow brown midvein which may be less marked on the starry white petals; bracts are usually  dark brown. Fruits are almost round capsules. 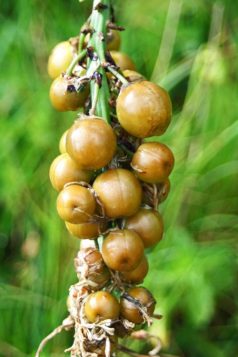 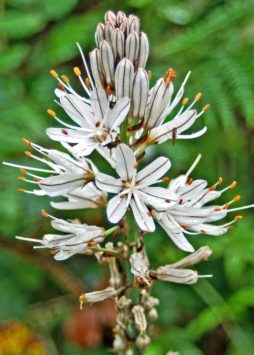 I took my first photographs of this striking plant toward the end of a memorable walk around El Cabrito mountain. It was growing on the edge of a made track, bright sunshine cast the plant’s shadow onto the adjacent rock and also made it tricky to get a clear image of the bright white flowers. 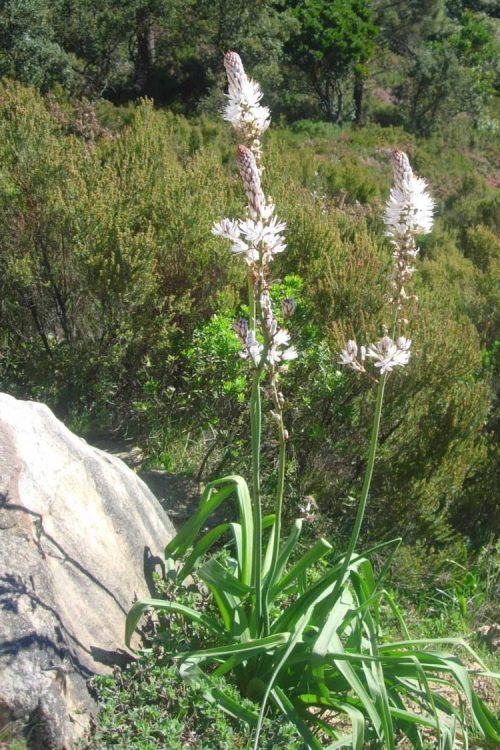 Thankfully the varied greens of  heather and pine trees in the background helped the flower spikes stand out. 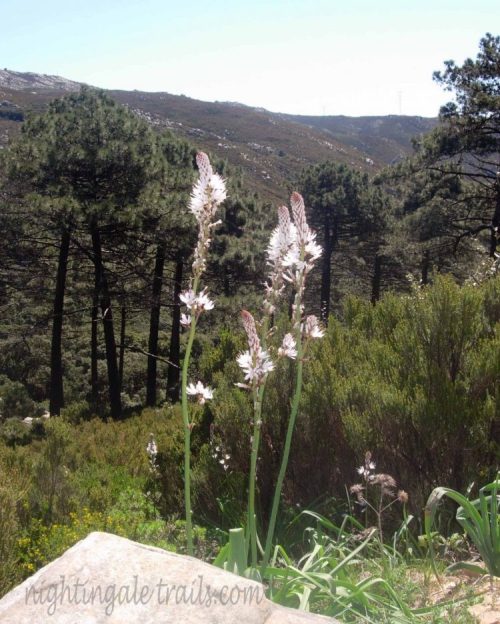 We came upon it again on El Bujeo mountain, which neighbours El Cabrito but has a different aspect and character. Here it was growing in a damp grassy clearing in front of a Rhododendron shrub. 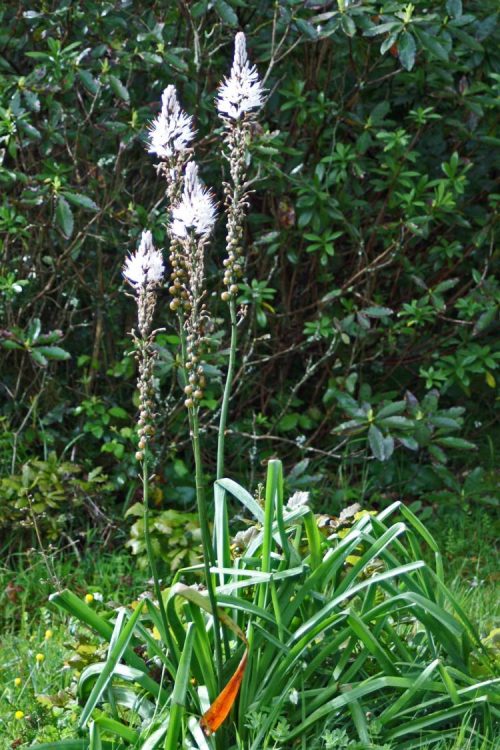 And here it is in the forefront of this amazing view from the summit, which looks down over the busy port town of Algeciras and across the Bay to Gibraltar. I took this photograph way back in 2005 since when there has been a lot of development and construction on both the Spanish mainland and on Gibraltar itself, but I’m sure the view remains stunning. 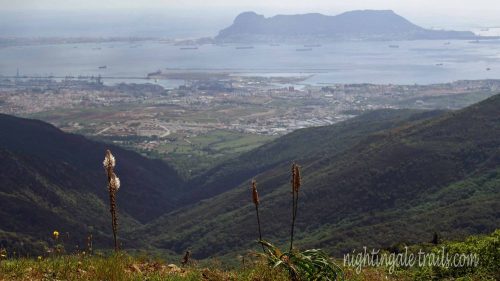 The leaves are used to wrap burrata, an Italian cheese. The leaves and the cheese last about the same time, three or four days, so fresh leaves are a sign of a fresh cheese, while dried out leaves indicate that the cheese is past its best.

Although left alone by animals, the starchy tubers are just about edible by people and are known to have been used as food by poorer people, in times of  hardship and need; hence such food was thought good enough for the slaves.

Medicinally the Asphodel was supposedly a remedy for poisonous snake-bites and a specific against sorcery; it was fatal to mice, but preserved pigs from disease.

Libyan nomads made their huts of asphodel stalks.

Photographs: All my own work!