The Nightgales are back and much more

A sad sight greeted me this morning – a mole had somehow managed to fall into the swimming pool and whether as a result of the fall or from the sheer shock to its system, had died.  Moles are quite troublesome to many a gardener here, just as in the UK, and can wreak havoc to a lawn overnight. I would rather not have their company in my own garden, but they do like it here, perhaps because they know I won’t deliberately hurt them.

It was a warm sunny day and sweeping up leaves I realised the wind had changed direction. Perhaps as a result of that I saw several returning Black Kites in the early afternoon, some quite low and passing by the back of the house, others further away at the front. Late in the afternoon I heard one of my favourite sounds of summer – the distinctive cheerful trills and calls of  Bee-eaters. I was really happy to hear them and even happier to see them as they passed by, flying low and parallel to the main road, so they may have been returning to the local nesting site at San Enrique. The flock was closely followed by a single Swift, the first one I’ve seen locally this year.

Looking out of the kitchen window later on when it was almost dark, I noticed two birds at the bird bath, two Robins out together bathed and drank.

I stepped outside for a few minutes at around lunchtime this afternoon and heard the sound I eagerly anticipate each spring – the first song of a Nightingale! I was so happy to hear it I just stood and listened for ages, quickly realising that there were in fact two birds singing, one from very close by and the other a distance away. I’m particularly pleased as I will be in the UK for a few weeks from next week and would have been very unhappy to have missed their arrival.

A lovely sunny day brought out a good number of insects, including bees, various species of butterfly and several Egyptian Grasshoppers. 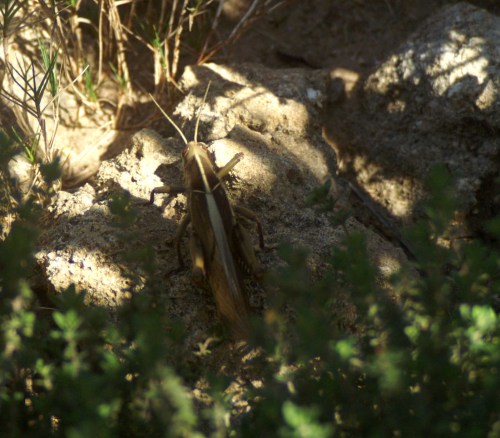 An Egyptian Grasshopper was flying restlessly from place to place around the garden, landing briefly on a rock.The striped effect on its back is a glimpse of folded wings as the elytra are not quite closed

This was quite a dark-coloured individual, but had the diagnostic striped eyes, so definitely not a locust. It also had a wrinkled face.

A little later on, hoping to hear more Nightingale music, I stood out on the terrace with a cup of tea and the camera and something moving very fast caught the corner of my eye. It was a male Wall Lizard rapidly pursuing a female, eventually catching her by grabbing the end of her tail in his mouth.

A male Wall Lizard pursued a very fast female, grabbing the end of her tail

She continued to move away, but he held fast, progressively getting a firmer grip higher up the tail. 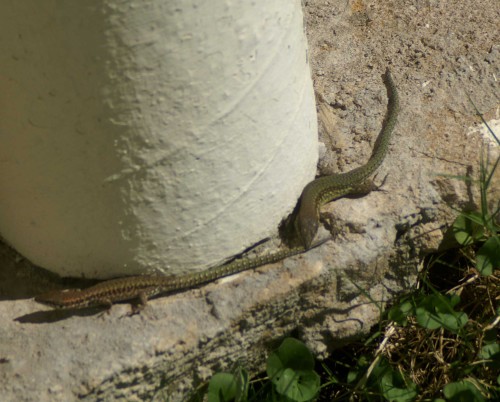 The pursuing lizard puts a foot on to the end of the pursued's tail to get a grip higher up, but she kept going

Round the pillar for lap two - he's still hanging on, gradually getting a better grip

Disappearing around the pillar 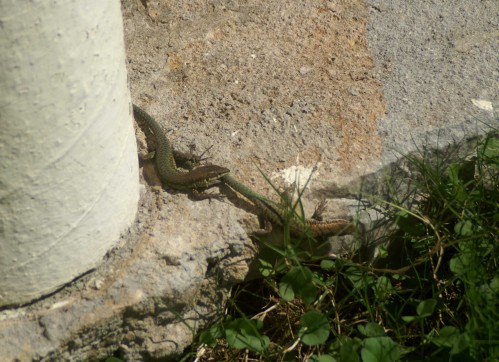 Around the other side, he's still hanging on as she makes a break for the edge of the path 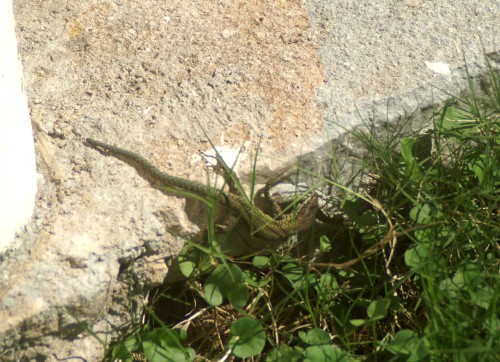 She made it over the edge, but he was not letting go

The struggle continued until the pair momentarily disappeared from view; seconds later they reappeared, the female had broken free and made a dash back for the cover of the air-conditioning unit with the male in hot pursuit. I waited for a while, but they did not venture out, so they clearly wished to continue in private.

A Red Admiral butterfly basking on a sunlit leaf

Later in the evening more birds came to bathe, a female Chaffinch was first to arrive, followed by two Blue Tits, then two Chiffchaffs. The Chaffinch was not happy to share though and chased the smaller birds away several times.

A walk around the neighbourhood is especially enjoyable at this time of year when the air is still fresh and it’s pleasantly very warm but not hot. Blackbirds were out hunting worms for hungry young, Collared Doves were very visible, flying noisily from trees and back again, so I think they are probably beginning another mating cycle. A little bunch of mixed male and female Serins were pecking around on grass beside the road, flying up to a tree as a car passed them. Most noticeable birds singing this week have been Goldfinches. A resident species, there are usually a few about, but there have been a lot here the past few days, so the numbers have been boosted by those returning to breed and on passage back from Africa. 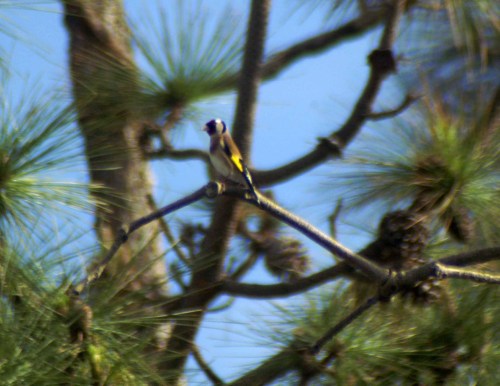 A Goldfinch singing from the top of a pine tree

Warm enough to sit outside early this morning, I had the added joy of a Nightingale singing from the cork oak trees just a few metres away from me. A Robin and a Chiffchaff were out foraging on the lawn and at around 11am there were both Greenfinches and Goldfinches in the garden.

An early morning butterfly - a Speckled Wood, warming up on a leaf

I’ve had some lovely close views of Blue Tits the past few mornings as they come to the kitchen window, to look for spiders I think.

My makeshift birdbath has been in high demand this week and this morning as I strolled around the garden I was surprised when a Blue Tit arrived to bathe right in front of me. It stayed put when I took its picture too, so must have really needed to freshen up. 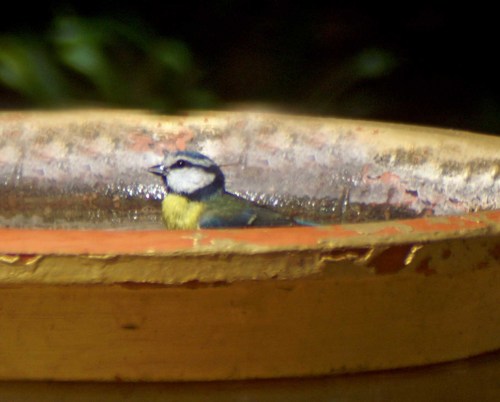 The Blue Tit was once again displaced by a female Chaffinch, who just sat on the rim of the bath territorially, neither drinking nor bathing. 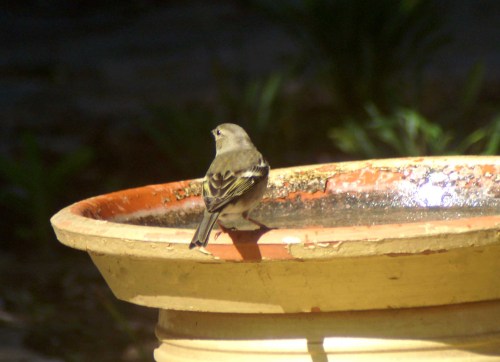 The female Chaffinch stood keeping other birds away

Not far away, sitting on the edge of the path surveying the garden was a  Psammodromus Lizard, another lizard passed by that I thought for a minute may have been another similar one; I saw a mating pair very close to this spot last year and thought I might be doubly lucky. It was a Wall Lizard though, and after checking each other out he moved along a bit further and also stopped to overlook the same path of garden. 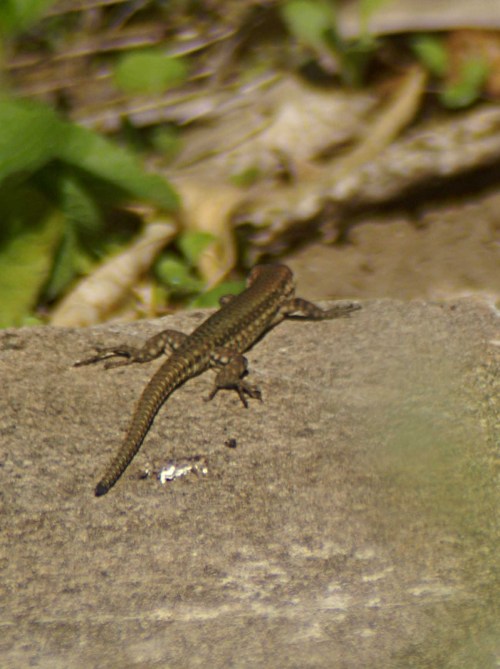 A Wall Lizard, also well coloured, showing regrowth of the very tip of his tail

Balmy weather and bounty for birds

What a difference a week makes; following two weeks of rainy days and general wintry weather, this first week of February has been sunny and warm, with temperatures of 16ºC or more in sheltered spots, and there is a general sense that spring is on the way. The nights are still chilly, but the drier warmer mornings have coaxed the birds from their recent hiding places and they have been much more active and visible. Some have begun to sing regularly, in particular Wrens, Blue Tits and Serins. Thursday morning was quite magical, the first birds I heard were Jays squawking as they made their way through the cork oaks, and my first sighting was of 3 lovely Goldfinches feeding  on weed seeds and Blue Tits, one exploring the nooks, crannies and plants on the terrace, all the while keeping up contact with another nearby. The regular Blackbirds were about on the grass and a Short-toed Treecreeper arrived to scrutinize the trunks of some of the palm trees. 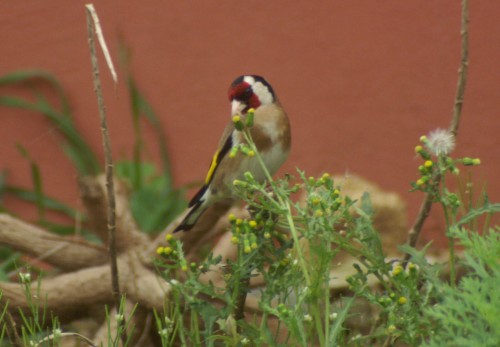 Goldfinch feeding on the seeds of groundsel

I could hear Spotless Starlings whistling and calling tunefully from high up in the palm trees at the back of the house and watched a Wren, first singing from various spots along the top of the garden wall, then poking about in the foliage growing against it. A very colourful Greenfinch appeared briefly on the fig tree; I haven’t seen one for ages. 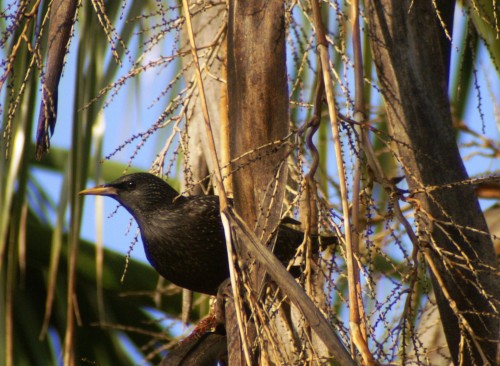 Spotless Starling - (this is a young one)

A Wren singing from a shrub growing against the garden wall

Short-toed Treecreeper taking a drink or perhaps looking for insects

From the kitchen window I saw a pair of Blackcaps after the berries on the dama de noche shrub, two Chiffchaffs flitting about, and two female Chaffinches and half a dozen Housesparrows all pecking around on the ground. The Robin was out and about too, again I hadn’t seen one for a while another Treecreeper came in, landed on a yucca tree trunk, then flew across to the birdbath, something I’d not seen one do before. I think it was drinking, but it may have been looking for insects. (My picture was a bit rushed, but the bird was only there for a few seconds and it took me by surprise).

A tropical and semi-tropical member of the Cestrum family, this Mediterranean classic is grown for the amazing night-time perfume that on a hot August night permeates the air (and our house) with its almost-overpowering scent. This is why it is grown, certainly not for its beauty; it is generally a leggy, untidy shrub and the flowers are small, lime green and held in clusters that during the day have no perfume. The small white berries appear in the late-autumn winter, which is why I don’t cut my plant back sooner – I wait until the Blackcaps have enjoyed them.