He turns his head to sing out in another direction

Birds are still singing, particularly noticeable at the moment are Serins and Greenfinches; as I walk around the roads of the locality there seem to be Serin’s trilling out from perches or performing their distinctive territorial flights every hundred metres or so. 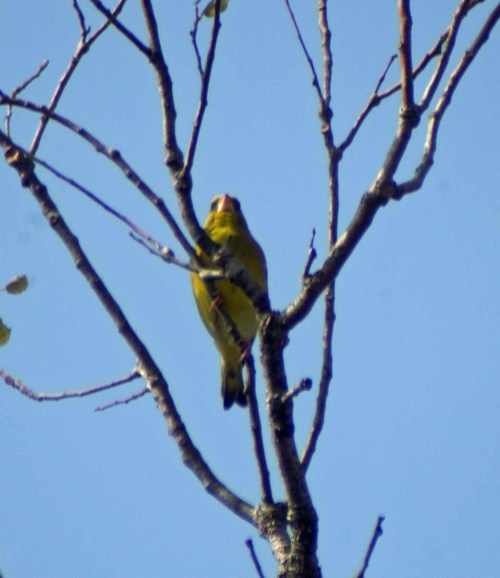 There are some very exotic-looking flowers opening up now; I've tried to find out what this tree is, but no luck so far

Blue Tits seem to be everywhere, I caught sight of one pecking around the orange tree blossom in the photograph, I wasn’t quite quick enough to get the bird in, so I’m afraid you will have to imagine how pretty it would have looked. 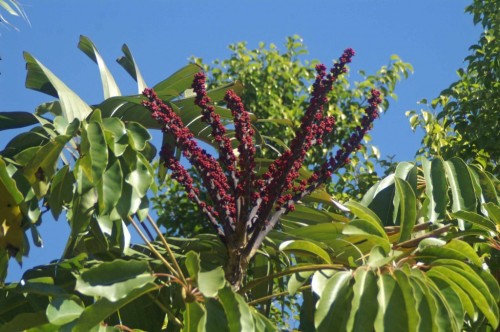 Another exotic flower spike noticed on my rounds

A pair of  Blackbirds have been very busy for the past ten days or so; I’ve seen them both foraging in the garden so they clearly have a young family to feed. I have resisted clearing away the dry leaves and twiggy bits of tree debris from the edges of the paths so the birds can seek insects there; the Blackbirds characteristically add drama to their searching, showering the paths and themselves with discarded material. They make even more mess, but I love to watch them doing it.

The weather has been changeable, but with enough sunshine to bring flowers into bloom and insects to pollinate them. I planted a few dark pink osteospermum plants about four years ago that have self-seeded and I now have a large patch of them in all shades of pink from very pale through to very dark. They look very pretty and have been buzzing with all sizes and variations of bees and hoverflies. I have no idea what species most of them belong to, but I photograph them anyway.

A bee I've not noticed before, having a gingery-brown coloured 'furry' appearance 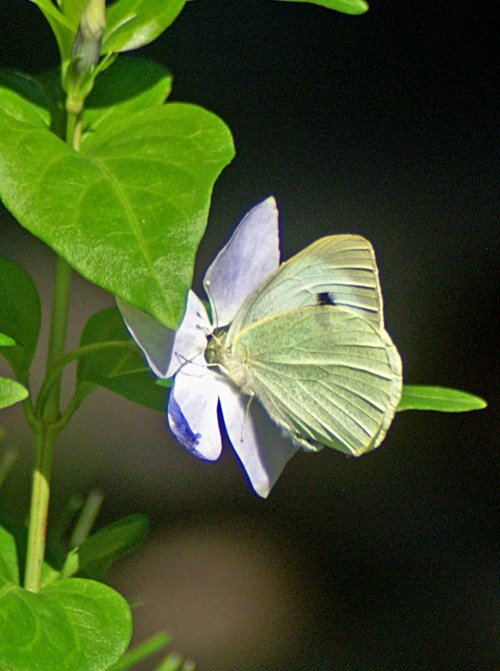 A Large White butterfly on a blue periwinkle flower

There have been a good number of butterflies about, a lot of Large Whites, Red Admirals and one I’d not seen in the garden before – a Moroccan Orange Tip which didn’t find anything to tempt it to stay for long. 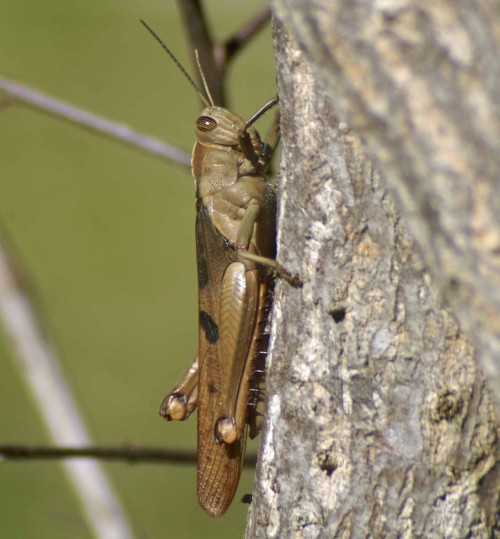 A large Egyptian Grasshopper on the trunk of the pomegranate tree. Sometimes mistaken for locusts, the grasshoppers can be identified by their beautiful striped eyes

The clattering sound of Egyptian Grasshoppers on the wing is a familiar sound in and around the garden at this time of year as the big bulky but handsome insects are stirred into action by the warmth. The one in my photograph was big, but only about two-thirds the size of a fully grown adult female, so maybe an adult male or a young female with a couple of morphs still to go through.

Another familiar insect has been on the prowl lately: this is a 'paper wasp' - Polistes gallicus. They resemble the common wasps but do not seek to share our food and will only sting if they are touched or stepped upon.