I saw a few lizards on Sunday up at Castellar, but only as they scuttled for cover as we passed close by them. Since then I’ve kept a lookout around the garden, particularly in the warm sunny spots against the walls. I spotted my first one as I was looking out of the upstairs bedroom window, a small elongated dark shape, travelling fast horizontally along the light coloured wall. I saw it stop in a sunny spot where wall meets pillar and ran downstairs to grab the camera, hoping it was there for a good warm-through; luckily it was and stayed still to have its picture taken.

The next day I happened upon another one, much paler in colour, as it was emerging cautiously from the cover of the upturned flower pot that is my ‘bird-bath’ base. 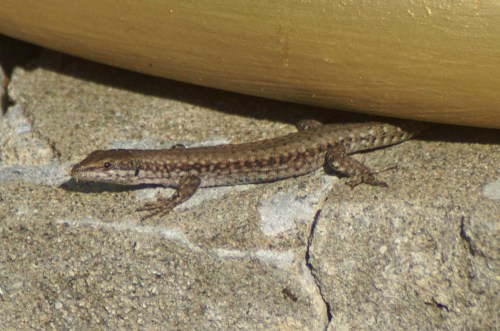 Yesterday I heard the Tree frogs croaking loudly and went out to investigate. There were two of them out sunbathing, one squeezed into a corner of the pool and the other, the one I believe was making the noise, was in the filter recess- a good spot as his voice would be well amplified in there and he has another escape option as he can dive into the filter pipe.

The two frogs were quite different in colour, one a dark olive green/brown and the other a clearer dark green. I can’t decide if this is the original one I saw last week after a few days out in the sun, or a ‘new’ one.

The males are definitely becoming more vocal; I hear them at random times during the day and most evenings, starting around sunset, which is about 7pm. There are often two or more croaking at, or to one another, and sounds as though one or more may be approaching the pool from outside it.

The warmer weather has woken up the local Tree Frogs. In terms of volume of croaking I think of them as the Wrens of the amphibian world- both produce an astonishing and disproportionate level of noise from tiny bodies. I have heard the frogs calling raucously from their arboreal homes at random times throughout the days, but they have also been active after dark and calling from the vicinity of our swimming pool, (no chemicals, just two-thirds full of rainwater). I have been out with a torch to try to locate them, but they quickly fall silent and dive back under the water. However, I was out this afternoon rescuing large black beetles that had fallen into the pool and noticed what I first thought was a slimy black dead leaf  stuck against the tiles of the pool wall. It was a tiny, very dark coloured Tree Frog all hunched up and sunbathing. The tiles are a good measure of its size as they are 2cm x 2cm square, and the frog hardly stretches to two of them.

It clung there, trying to ignore me taking his photograph, but after a few minutes of me trying to get a good angle, he plopped back into the water. He didn’t go far and stayed close to the surface, giving me a good view of his surprisingly long legs. As I walked around the pool to get nearer to him I spotted another frog  dive down to the bottom as I got close, so he’s not lonely in that huge space.

Attractive little frogs, about 5cm long. Disc-like suckers on tips of fingers and toes enable them to climb through vegetation easily. Mainly nocturnal, but sometimes discovered sitting in full sun on foliage where they rely on their usually-effective camouflage as protection from predators.

The colouration of the frogs varies considerably and may be adapted according to the habitat. I have seen them in a range of shades from very bright to very dark green, but today’s are definitely the darkest to date.

5/3/07 We came upon this very bright green individual when opening up the table-tennis table, where he may have spent the winter. The photo shows the frog at just about his actual size.

It’s still early days in this year’s Tree frog courtship season, but last year’s, that was based around our pool again and reached its height in late March, was so charming and memorable, I feel it’s definitely worth repeating my journal entries here. It’s a good insight into an aspect of Tree Frog behaviour too:

Around the middle of the month our normally peaceful evenings began to be disturbed by some very loud croaking sounds coming from the vicinity of our swimming pool (full of clean winter rainwater since the pump broke down last autumn) . The sheer volume led us to believe that the sounds must be emanating from big frogs or toads, but each time we ventured outside to try to spot the croakers the noise stopped and we couldn’t see anything at all. This game of hide-and-seek the frog went on for several nights, then one sunny morning I went out with my camera to tour the garden and was amazed to see a tiny, very green frog sitting on top of the rubber duck that used to hold the floating thermometer. It was such a comical sight I was chuckling to myself for ages, especially as I realised that this tiny creature was probably also one of the participators in the nightly croaking contest. From its size and bright all-over green colour this could only be a Tree Frog, so he must have ventured down from his normal habitat and had staked out the pool as his pitch for attracting a mate. 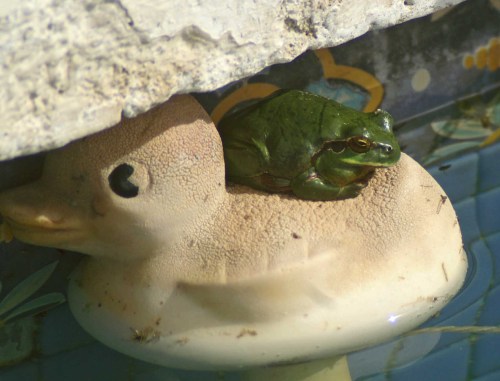 He was not at all phased by my presence or my photographing him and sat perfectly still, dozing in the warm sunshine for most of the afternoon, no doubt conserving energy for a night of raucous activity tonight.

The defender, vocal sac inflated ready to take on his opponent

That evening, when the cacophony had been underway for a while I went outside with a torch, hoping that now I knew where the sound was  coming from, I may be able to spot the frogs in action. Sure enough , there was ‘our’ little male, still sticking close to his duck ‘island’, his vocal sac inflated to such an extent that it almost doubled his size.

As we watched him we heard more croaking approaching us from the direction of the neighbouring cork oak trees, and then a soft ‘plop’ as a challenger dropped into the water on the opposite side of the pool. Shining the light onto the water we picked him out as he swam across the surface towards our little fellow, vocal sack fully inflated and croaking loudly.

A couple of hours later I ventured out for a last quick look and discovered the challenger sitting quietly and I thought, distinctly smugly, upon the duck-throne. That was a surprise, but for them the night was young and there was plenty of time for things to change…