The weather this week has been wintry, lots of heavy rain, strong winds and generally cooler temperatures. I’m not complaining as I know that by the summer I’ll be longing for such days, but it does curtail outdoor activities for me and the wildlife. My excursions have been very limited, but brightened by the sight of the sunshine-yellow of the Acacia trees planted along the main entrance road into Sotogrande, that are in glorious full blossom now. 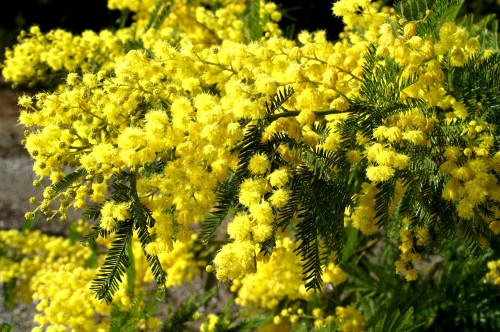 A closer look at the blossom & leaves

Acasias, or Wattles are a large genus of shrubs or trees distributed from Africa and India to Australia, where there are many species. Many species are grown in Mediterranean gardens.

The tree and blossom in my pictures are of the Silver Wattle – Acacia dealbata,which originates from SE Australia and Tasmania and which has been widely naturalised and planted  in Spain and Portugal.

It is grown as an ornamental plant, it is highly scented and the flowers are cut and sold by florists as ‘mimosa’, but they are also planted for soil stabilisation.

They are very quick-growing but their branches are rather brittle and it’s not unusual to see broken branches after storms or strong winds have passed.