The bizarre but gorgeous Purple Gallinule-Porphyrio porphyrio, or Purple Swamphen as it should be more prosaically known, is rated as a scarce resident in Southern Spain. It has the reputation of being  generally difficult to see, so I count myself more than lucky to have had a colony of them very close by, residing within the confines of the Guadiaro Nature Reserve at Sotogrande.

A number of the resident Purple Swamp Hens feeding around the lagoon edge, viewed from the beach

There is a small but stable breeding community of 10 – 12 Purple Gallinules here and as non-migratory residents it is possible to see them at most times of the year. The best months for good views are during the winter, particularly January and February before the reeds and other vegetation grow too high and they are more likely to be seen out in the open. They become more secretive in the spring and summer when they are breeding, although you may well hear them still.

The Purple Swamp Hen is so strangely colourful and exotic-looking that it wouldn’t be out of place as a character in a Dr. Seuss story. It is highly unlikely to be confused with anything else and doesn’t really need a description as there is nothing else quite like it, but here is one anyway.

Similar in size to a domestic chicken, both sexes of the bird are similar in appearance. They have striking bright blue plumage to the throat and breast that blends into a glossy darker purple-blue over the rest of the body and the wings. There is a short upturned tail which is often flicked as the bird walks flashing the bright white coverts beneath it. The very large bill is bright red and triangular in shape, almost parrot-like. The upper mandible is  bulky and curved, adding to the bird’s unique appearance. The bill extends to the top of the head as  a bright red plate, similar to that of the Coots’ white one (the species are related). The long legs are also bright red. The feet have long slender toes with fine claws, especially the rear toe, and were designed for walking across floating and emergent vegetation. The eyes are red too. 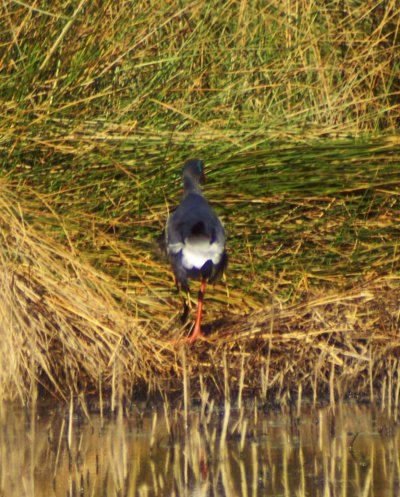 The bright white rump topped with a short upright tail

The swamp hens have some very strange calls, none of which could be called bird-like or melodic, but what they lack in musicality they make up for in originality and decibels. If you don’t know the sounds you may well think they were eminating from an animal rather than a bird. Some days I have walked through the gate at the entrance to the reserve and immediately heard them but then not had a single sighting of them.

On other occasions I have heard an alarm call followed by a swamp hen breaking cover from the reeds then flying noisily and dramatically from one side of the lagoon to the other. The flight is clumsy, but the birds are capable of flying long distances. They are particularly noisy during the breeding season. They swim well, particularly for a bird without webbed feet and have a style similar to a duck’s, moving their heads back and forth as they travel through the water. 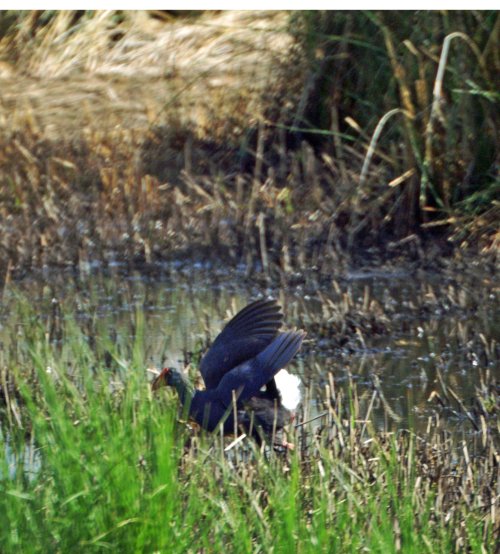 An alarmed bird running, flapping its wings and flashing its ruffled white rump

The Gallinules’ diet is known to consist predominantly of plant matter including shoots, leaves, roots, stems, flowers and seeds. They have also been known to eat eggs, ducklings, small fish and invertebrates such as snails.

The birds have a suitably strange technique for feeding, which is fascinating to watch. They wade through the shallow water of the lagoon edge, stopping periodically to grasp a stem from under the surface. They select a food item, picking it up with one foot, then hold the stem or root between the toes and raise it up towards the bill. The bird then strips the tough outer casing from reed stems or roots and eats the softer material inside. 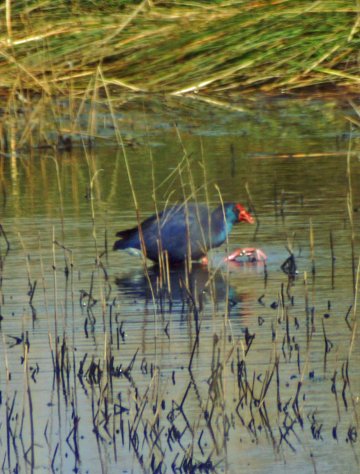 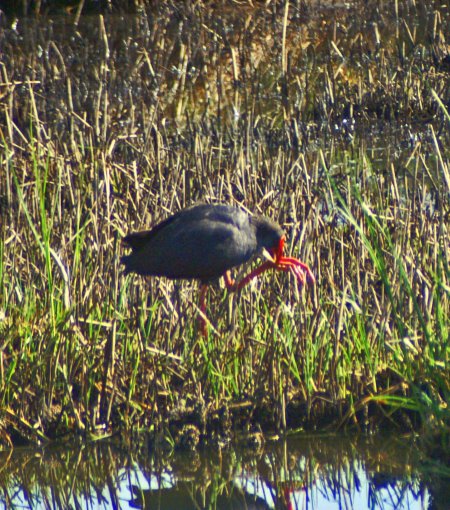 The foot clasping food is raised up towards the bill

Although I have never witnessed it, the male Purple Swamp Hen apparently has an elaborate courtship display, holding water weeds in his bill and ‘bowing to the female with loud chuckles’ (wikipaedia). 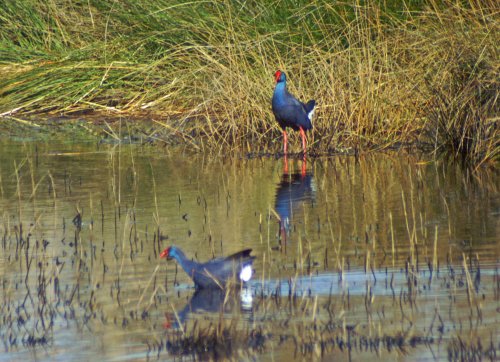 Members of the species here in Spain, P. porphyrio, tend to be monogomous. Pairs nest well hidden amongst matted reeds slightly above water level in clumps of rushes, where the female lays 3–6 speckled eggs, pale yellowish stone to reddish buff, blotched and spotted with reddish brown. The incubation period is 23–27 days, and is performed by both sexes.

The chicks are feathered with downy black feathers and able to leave the nest soon after hatching, but will often remain in the nest for a few days. Young chicks are fed by their parents for between 10–14 days, after which they begin to feed themselves.

A Purple Swamp Hen chick is not particularly beautiful. I photographed this one at Laguna Sidonia Medina

I never saw once saw chicks here in Sotogrande, but came upon this one on a trip to Laguna Sidonia Medina one May. Up to their ankles in soft mud, there were two of them out in the open on the bank of a shallow stream and a parent was close by calling them anxiously from nearby cover.

Other places to see Purple Swamp Hen in Southern Spain 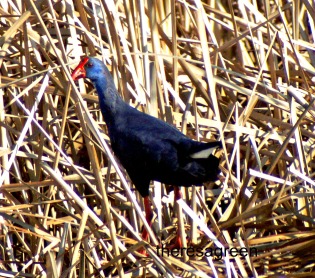