I thought I’d start the week’s posts with a look at the controversial Ragwort plant. It’s in full bloom now and its golden flowers are very noticeable in a wide variety of habitats, on roadsides and railway embankments, on waste ground and clifftops, but it also occurs in fields and pastures, which is where its troubles begin. 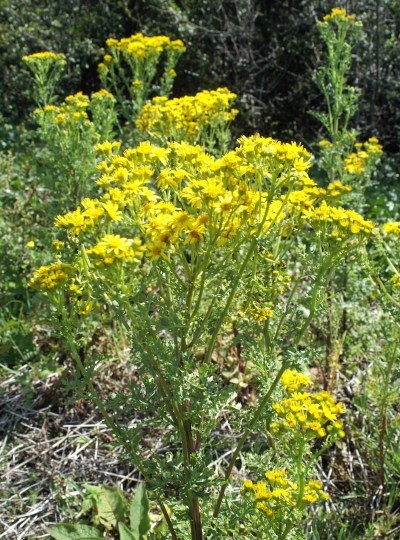 The New Atlas of the Flora of Britain and Ireland (2002) shows Ragwort as native and states that ‘the distribution of S. jacobaea is unchanged from the map in the 1962 Atlas’.

Common Ragwort is generally known as a biennial plant that overwinters as seeds or as leaf rosettes, but in certain conditions it may survive as a perennial. 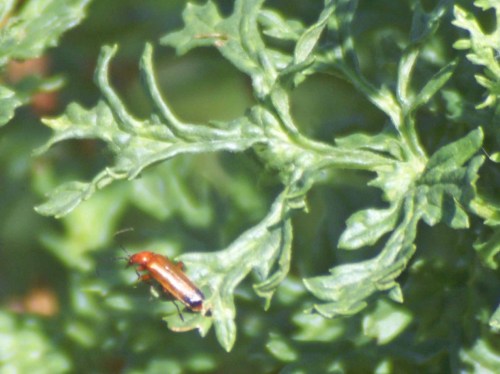 The leaves may be light-dark green and are attractively deeply cut and lobed. The plant grows from 30-100cm in height, with woody stems coloured red at their base. The upper part if the stem is branched, bearing golden yellow flower heads in large, dense terminal clusters that are almost always rayed and daisy-like. 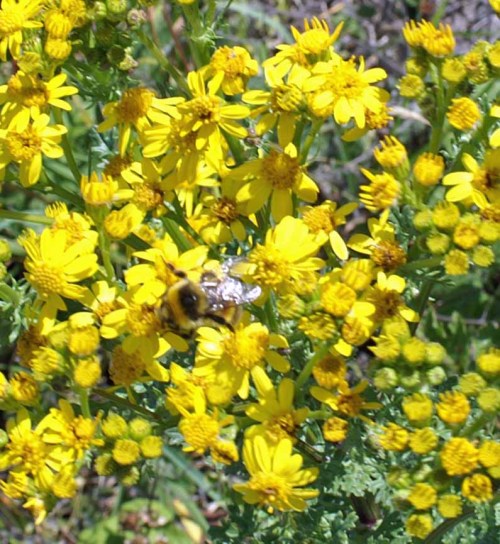 The issues with ragwort arise from the fact that the plant contains poisons that may be lethal to domesticated grazing animals if sufficient quantities are ingested over a period of time. For this reason ragwort is one of a very few plants listed in the Weeds Act (1959). Opinions concerning the dangers to livestock presented by the presence of the plant have long differed and continue to do so; there is sustained pressure from some quarters that wish to see the plant eradicated, but more recently there is also a strong counter-argument from conservationists for its retention, as its importance has been recognised as a food plant for a number of insect species.

There is a great deal of information and argument concerning the plant to be found on a variety of websites on the internet. The first of the following pieces was written 94 years ago, giving some indication of how long this controversy has raged. I found it interesting and it explains how the plant may be inadvertently fed to animals as a component of hay, and the very unpleasant effects that may have on them.

From the report of the Board of Agriculture’s Chief  Veterinary Officer (1917):

“It is not generally recognized that the common British Ragwort is poisonous to cattle. This probably arises from the fact that poisoning under natural conditions is a slow process, that is to say, an animal does not receive, and could not eat enough of the weed at one meal to cause acute poisoning. On the other hand, the poison is cumulative in its action; with continuous doses the amount of poison which becomes available is sufficient in time to cause very serious symptoms which often end in death….. The following represent broadly the circumstances of the cases which have recently come to the notice of the Board. Pastures containing a considerable proportion of the weed were cropped in the hope that the comparatively early cropping might help to get rid of it. The crop was made into hay, and owing to the prolonged spell of cold weather and the scarcity of other feeding stuffs, this was fed later and in considerable amount to animals at pasture.
…. Some of the animals fed on the Ragwort died in a few days after the first appearance of definite symptoms. In others the symptoms continued for a month or more and deaths occurred at later dates. It would appear also that although animals which had received a toxic amount of Ragwort over a certain period may seem healthy at the time when feeding on the material is discontinued, they nevertheless develop active symptoms of poisoning and die at a later period. Thus in the cases investigated some of the animals did not show definite symptoms until twelve days or more after the feeding with Ragwort had been discontinued. In the early stages the animals have the appearance of being hide-bound. Later, they walk with a staggering gait, some appearing to be partially blind or heedless of where they go. Later they may become very excitable, and will charge at anyone who approaches them.  … There is no cure, and prevention resolves itself into removing the Ragwort from the forage, or eradicating it from the pastures.”

Much more up to date, the following points are extracts from a very detailed and compelling report on the importance of the plant to conservation from Buglife – the Invertebrate Conservation Trust.

1. At least 30 species of insects and other invertebrates are totally dependent on Ragwort as their food.

2. Many other species of insects which eat Ragwort, or require the nectar and pollen from the flowers, can also use alternative plants. However, Ragwort is often significant in supporting viable populations, especially in districts where such alternative plants may be absent or too scarce.

It must be emphasised that Ragwort is a major nectar source for many insects, especially:- 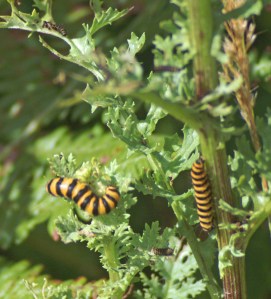 Ragwort was formerly much employed medicinally for various purposes. The leaves are used in the country for emollient poultices and yield a good green dye, not, however, permanent. The flowers boiled in water give a fair yellow dye to wool previously impregnated with alum. The whole plant is bitter and aromatic, of an acrid sharpness, but the juice is cooling and astringent, and of use as a wash in burns, inflammations of the eye, and also in sores and cancerous ulcers – hence one of its old names, Cankerwort. It is used with success in relieving rheumatism, sciatica and gout, a poultice of the green leaves being applied to painful joints and reducing the inflammation and swelling. It makes a good gargle for ulcerated throat and mouth, and is said to take away the pain caused by the sting of bees. A decoction of the root has been reputed good for inward bruises and wounds. In some parts of the country Ragwort is accredited with the power of preventing infection.

Culpepper says it is ‘under the command of Dame Venus, and cleanses, digests, and discusses. In Sussex we call it Ragweed.’

The poet John Clare also had a positive opinion of the plant, as revealed in this poem of 1831:

The sun tanned sward in splendid hues that burn

So bright & glaring that the very light

Of the rich sunshine doth to paleness turn

& seems but very shadows in thy sight.