Recent gifts from friends of carrier-bags full of their organic, home-grown oranges, for turning into deliciously sweet juice, has reminded me how significant citrus trees are in the local landscape, particularly now.

Thousands of orange trees line streets, boulevards and the parks  of towns, cities and villages throughout much of Spain. In the winter, from the end of December onwards, the fruits are ripe and deeply coloured, and suspended against their background of dark evergreen leaves they create a rich and colourful display. Those planted thus are known to British ex-pats as ‘Seville’ oranges, traditionally used for making marmalade and taste bitter and sour to eat; a deliberate ploy where the trees are planted for decorative purposes so the fruit is not picked by passers-by.

In many places the fruit continues to ripen and just falls to the ground, but in the larger cities  such as Seville and Malaga, sometime during January or February,the local governments employ people to pick them and they are sold on a commercial scale for making into marmalade, or the extraction of their essential oil to the perfume industry.

Out in the countryside the sweet edible oranges are also ripe and ready for harvesting. Most of the oranges grown here are sold for juicing rather than for eating; the bulk of those exported (70%), are grown in the Valencia region. Many supermarkets  buy those produced locally in Spain, and some have juicing machines on the premises to press the fresh fruit for customers on demand. In our local area, in the province of Cadíz, there are many orange groves of varying sizes and growers set up displays of the fruit and other produce they may have, and sell it directly to anyone who wishes to buy it.

Sadly, there are also many groves of fruit that are untended, having been bought up by companies or individuals for the land they stand upon for future development as golf courses, or some other construction. It is sad to see them neglected and to see the fruit fall to the ground and be left to rot, but at least while they remain standing they provide habitat for a variety of small birds and other wildlife. 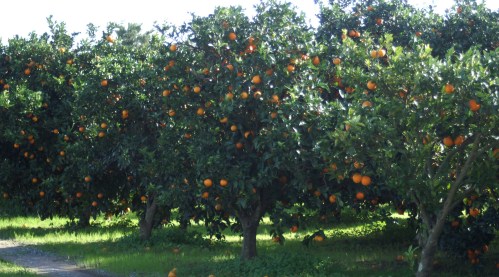 Oranges – A brief History of Cultivation

The Persian orange, grown widely in southern Europe after its introduction to Italy in the 11th century, was bitter. Sweet oranges brought to Europe in the 15th century from India by Portuguese traders quickly displaced the bitter, and are now the most common variety of orange cultivated. The sweet orange will grow to different sizes and colours according to local conditions, most commonly with ten carpels, or segments, inside.

Portuguese, Spanish, Arab, and Dutch sailors planted citrus trees along trade routes to provide fruit as a source of vitamins to prevent scurvy. On his second voyage in 1493, Christopher Columbus brought the seeds of oranges, lemons and citrons to Haiti and the Caribbean. They were introduced in Florida (along with lemons) in 1513 by Spanish explorer Juan Ponce de León, to California by the Franciscans in the 18th century, and were introduced to Hawaii in 1792. (Wikipaedia)