Birds in the hand in Gibraltar

There are many reasons to be cheerful about being able to spend time in both the UK and Spain, not least of which is the privilege of watching species of birds that migrate between northern and southern Europe or Africa in both locations at different times of the year. The location of our home in Spain, about a 20 minute drive from Gibraltar, is directly beneath one of the major migration ‘highways’, which passes over the Rock and Straits of Gibraltar to Northern Africa and beyond. As a result our avian population is boosted considerably during the main migratory periods of spring and autumn as birds take the opportunity to feed here, taking on fuel for the next stage of their incredible journeys.

Gibraltar is an important link in the chain of gaining knowledge of the movements of migrating birds and many thousands of raptors are observed and counted from vantage points as they pass overhead. Smaller birds are monitored through their initial capture in mist nests and subsequent ringing at the designated Bird Observatory, where I recently spent a fascinating morning observing the observers and their work. The main purpose of my visit was to gain an insight into the process of bird ringing so that I might write a piece for the gonhs member’s outings blog, which I have done, but it was too interesting a day not to share here too.

The home of the Gibraltar Bird Observatory is a small building perched high on a ledge carved into the the Rock on its north side. It is set within the Nature Reserve at Jew’s Gate and levante mist permitting, has superb views across Gibraltar Bay to the headland of Tarifa and across the  Straits to North Africa.

A view from the bird observatory across the bay to Tarifa. The monument 'The Pillars of Hercules' represents and show the orientation of the twin mountains either side of the Straits, Gibraltar being one and Monte Hacho, at Ceuta.

The Pillars of Hercules (Latin: Columnae Herculis, Greek: Ηράκλειες Στήλες, Spanish: Columnas de Hércules) was the phrase that was applied in Antiquity to the promontories that flank the entrance to the Strait of Gibraltar. The northern Pillar is the Rock of Gibraltar in the British overseas territory of Gibraltar. A corresponding North African peak not being predominant, the identity of the southern Pillar has been disputed through history, with the two most likely candidates being Monte Hacho in Ceuta and Jebel Musa in Morocco.

“The function of the Observatory is the monitoring and research into passerines and non-passerines, with particular emphasis on migration.” (gonhs website)

The first stage in the process is first to catch the birds. This is achieved by setting up a series of strategically placed lengths of fine mist netting, which the birds fly into.

A Chiffchaff temporarily held in a mist net

Clearly the birds struggle to free themselves, but the strands of netting are very fine and they are not left there for long as the vigilant ‘ringers’ make frequent rounds of the nets and quickly retrieve them. 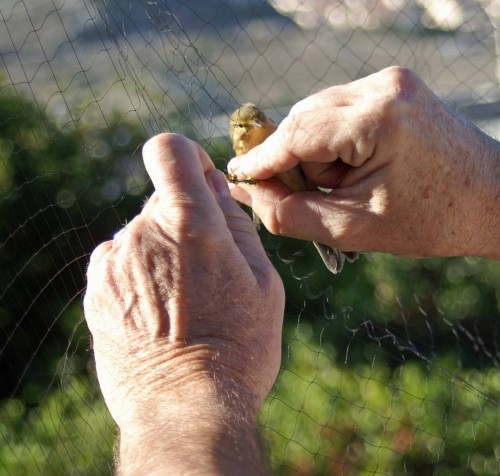 A Chiffchaff is gently and expertly extricated from a net

Once freed from the netting the bird is carefully placed into a clean cloth bag for transportation to the nearby observatory for ‘processing’. It is important that the birds are subjected to the least amount of stress possible and they stay calmer if visual stimuli are eliminated.

Back at the workbench in the observatory the bags containing the birds are hung onto hooks that are numbered to correspond with the number of the net they were taken from. Most of the birds remain still and quiet whilst awaiting their turn to be weighed and measured, although there are always the odd one or two who express their annoyance by wriggling around or chirping.

A Robin having its wing length measured

Bird ringing is carried out under the auspices of the BTO, British Trust for Ornithology, and Gibraltar uses British rings. Processing involves the careful and accurate  identification, measurement and general assessment of each bird in turn. The data taken is collated for serious scientific records and research into birds’ migration and movements and great care at each stage to ensure that those criteria are met. 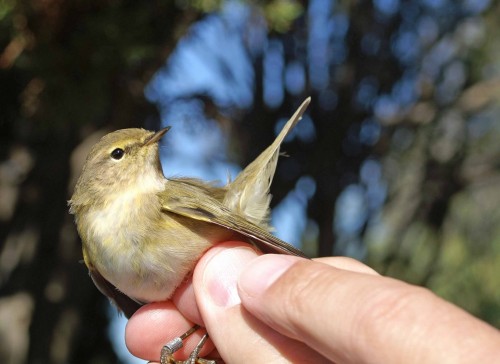 A beautiful Chiffchaff fully processed is held in the appropriate 'ringer's grip' to allow me to take its picture, then released.

Once the required data is logged, the bird is free to go. Most are eager to make good their escape, but a few will sit quietly on the ringer’s hand for a moment or two before leaving.

A female Blackcap sits quietly before taking off

This was a wonderful opportunity to see some beautiful birds at very close quarters. They always appear much smaller when seen this way that when they are flying free and the subtleties in the plumage are evident.

A Song Thrush eager to leave

During the course of this morning the two current resident ringers, with some assistance from two trainees processed 113 birds. The species ringed included Black Redstart, Chiffchaff, Blackcap, Robin, Serin and Song Thrush. It was fascinating to enter into their world for a few hours and witness their work first-hand and a real privilege to have such close views of some beautiful birds.