Recently I bought a bar of Carob ‘chocolate’ in my local health food shop, which reminded me that this is the time of year when the fruits of the Carob trees are ripe for harvesting. The trees have long been cultivated in Spain where its long brown pods were traditionally used as animal fodder, although nowadays they probably have more value as a natural additive to many human foodstuffs.

Carob or St John’s Bread in English; Algerrobo or Algorroba in Spanish and scientifically Ceratonia siliqua, is a species of slow-growing flowering evergreen shrub or tree belonging to the pea family, Fabaceae. It is native to the Mediterranean region where it has been cultivated for some 4,000 years for its edible beans and as an ornamental shade tree in parks and gardens.

The tree grows up to 15 metres (50ft) tall and is supported by a thick trunk covered with rough bark. They are slow growing and can live to be 200 years old. They are well-suited to growing in dry, harsh climates on infertile soils and may produce fruits for 80-100 years. 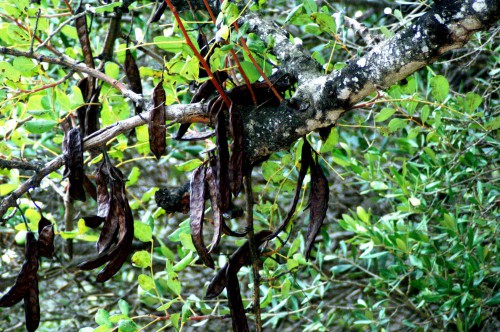 The Carob tree is dioecious (has separate male and female trees), so only the female trees bear fruit. Flowers of the male are stamen clusters with pollen, producing a very strong odor, while the female produces small, yellow, aromatic flowers (pistals), grouped in clusters.

Both male and female flowers produce nectar and attract large numbers of insects. There is also research supporting the idea that Carob flowers could be Bat-pollinated as the perfume is released at night and during the cool season when warm-blooded pollinators have an advantage over insects. 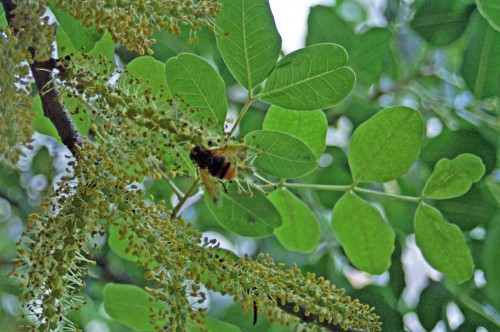 October-Flowers are highly attractive to insects

The perfume of the male flowers is a strong and curious one that may radiate hundreds of meters from the originating tree, particularly in the cooler evening air. Few descriptions of the scent that I have come across are at all enticing. It is even included on one list of the 9 worst-smelling flowers! Others claim it has “the scent of rotting flesh”; then another compares it to sweaty socks. Maybe it is best to stay upwind of a male Carob in flower.

The distinctive pods, or more accurately legumes, take more or less a full year to develop, starting off green and then becoming hard and brown, usually becoming ripe in September or October each year. The flowers and ripe pods are then together on the tree simultaneously.

Harvesting the pods without damaging the new flowers and next year’s crop must be tricky. In Spain and Portugal this is traditionally done using long canes to dislodge the pods, knocking them into laid-out nets on the ground if it is clear enough, otherwise gathering up is entirely by hand. An extremely labour-intensive operation, particularly as a fully-laden tree may yield a ton weight of pods. 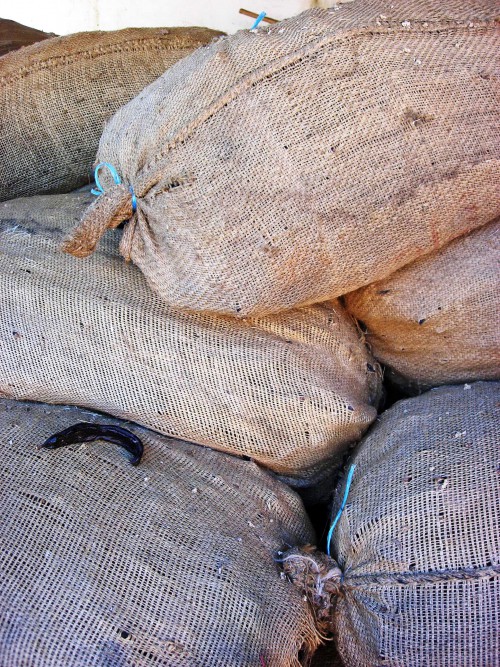 Traditionally Carob pods were used mainly as animal fodder, in Iberia this would have been mainly for donkies. Today, Carob pod meal is still used as an energy-rich feed for livestock, particularly for ruminants.

The carat weight measure used for gemstones originated from the weight of the carob seed, which was thought to be consistent. Sadly, modern research has now proved it to be no more consistent than any other seed. The word carat stems from the Arabic word qīrāṭ which was a very small unit of weight based upon the weight of the carob seed in that 5 carob seeds equals one gram and thus a 1 carat weight is 200 milligrams.

Spain is the world’s highest producer of Carob, which is now in high demand by the food industry and ad Carob pods are usually processed in their country of origin, this makes it an important contributor to the country’s economy.

After harvesting, the pods are both dry and wet cleaned and kibbled (coarsely ground) to separate the seeds from the pulp. After seed extraction, the pods are roasted, milled and sieved and then stored in controlled conditions to prevent them becoming hard and lumpy. The resulting powder, known as locust bean gum (ceratonia or carob bean gum) is then used as a gelling agent, stabilizer or emulsifier in ice-cream, dessert fruit filling and salads.

Carob powder is used in baking and food manufacture, sometimes as an alternative to cocoa powder. Carob bars, an alternative to chocolate bars, are often available in health-food stores. Non-dairy carob bars use vegetable fat, soya flour and soya lecithin as an emulsifier. It is naturally sweet so no added sugar varieties are available.

An oil called algaroba is extracted from the carob seeds to be used for medicinal purposes.